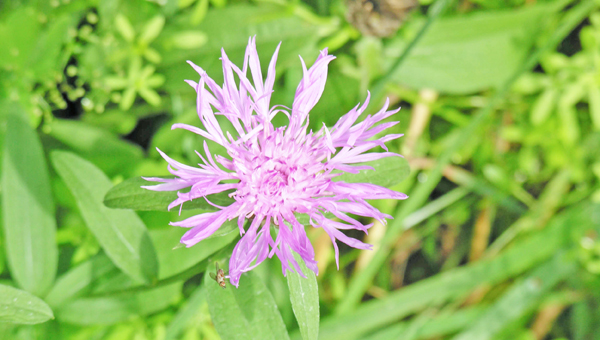 In a joint effort to expand the knowledge and understanding of the flora and fauna of Polk County, the Pacolet Area Conservancy (PAC) and botanist, David Campbell need your help in locating this month’s “Most Wanted — Plant,” Marshallia grandiflora, also known by the common names, Barbara’s Buttons, Appalachian Barbara’s-buttons, Large-flowered Barbara’s-buttons, Large-flowered marshallia and Monongahela Barbara’s buttons, to name a few.

Appalachian Barbara’s-buttons is known throughout central Appalachia – from Pennsylvania south to Tennessee with the largest populations occurring in West Virginia. Historically, it grew in North Carolina where it is ranked as “SH-State Historical” and “G2-Globally Imperiled” throughout the world, due to the rarity and/or vulnerability of the plant. It is historically known from Henderson and Polk Counties in North Carolina, and there is an historic record of the plant from Polk County.  The first, and only, record of this plant in Polk County was made in 1898 and found in “dry soil near Saluda.”  There was a specimen collected and it is housed at the state herbarium. Unfortunately, there have been no reports of this plant in the county since then, but that does not mean that it is not here.  That is why this plant has been chosen for this month’s “Most Wanted.”  The public is asked to keep a keen eye on the landscape over the next few months and to contact PAC if they think that they see this plant in the county.