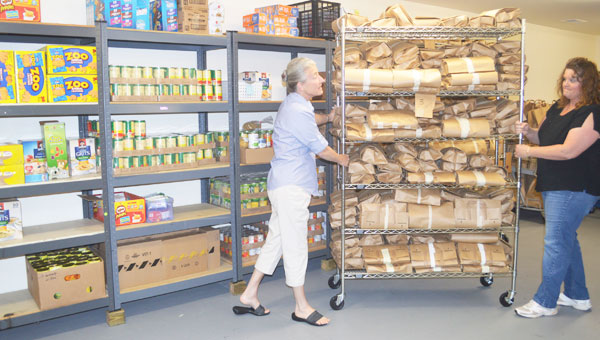 Outreach’s Carol Newton and Michelle Reedy move a cart in an expanded 1,400 square foot pantry at the Columbus Facility. (photo by Samantha Hurst)

“There are a lot of good things going on with the pantry,” said Outreach Executive Director Carol Newton.

Several of those good things became possible through grants from the Polk County Community Foundation (PCCF). PCCF provided $50,000 in funds for the $55,000 expansion project.

Outreach covered the last $5,000. Additional improvements will also include renovations to the original pantry space and improvements to the grounds, which are expected to amount to about $25,000.

“We have the expansion which is incredible, a great space, and we have filled it right away,” Newton said.

Outreach has filled those shelves through other partnerships now providing additional items to the 22-year-old ministry.

“I think what really engaged foundation members was that we could increase our participation in the Walmart Gifts in Kind program and that means bringing more of those paper goods to our clients,” Newton said. “We’ve also recently entered into a new agreement with BI-LO so we are able to provide that much more in healthy, expensive food to the client.”

For the past two weeks, BI-LO has provided Outreach with milk, eggs, chicken, Lean Cuisines and other refrigerated and frozen items.

“We’re also getting a lot of produce – fresh fruit like oranges, apples, strawberries – and we’re getting yogurt, fish and salad,” said Michelle Reedy, client services director. “We’re getting healthy, healthy, healthy food. It’s a lot more work but we’re happy to have it.”

Expanded room for shelving also allows room for the 4 tons of food collected during the recent Stamp Out Hunger project through the United States Postal Service. Last year Outreach received 1 ton of canned food from the collection.

Even two and a half years ago discussions were stirring of the need for an expansion, but until now Newton said, the timing and funding hadn’t aligned. She said the need however could not be ignored.

“We’ve had too much of an increase in the number of people coming to see us,” Newton said, “When you consider that we are feeding between 225-250 families a month now out of the pantry you can understand the need.”

Outreach fed about 170 families in 2011. According to Feeding America, there are 2,580 people or 12.7 percent of Polk County’s population who are insecure about where their food will come from each day. In Polk County, 24 percent of kids or 930 worry about having enough food.

Statistics also say that about 76 percent of those 930 children are eligible for food nutrition programs such as free and reduced lunches, school breakfast, WIC or SNAP, while the other 24 percent are left with only charitable response to rely on.

Wendy Thomas with Outreach said the expansion and renovations benefit those who work at the ministry as well.

“The way the pantry was it was very cramped, so we have also improved safety for the many volunteers who give their time,” Thomas said.

Remaining elements include lowering the ceiling and installing new insulation in the old pantry space. This will, according to Newton, hopefully lower utility bills for the non-profit offsetting the additional utility costs of the expansion.

Contractor Don Kurant is currently finishing renovations and recently completed the expansion, which began in March.