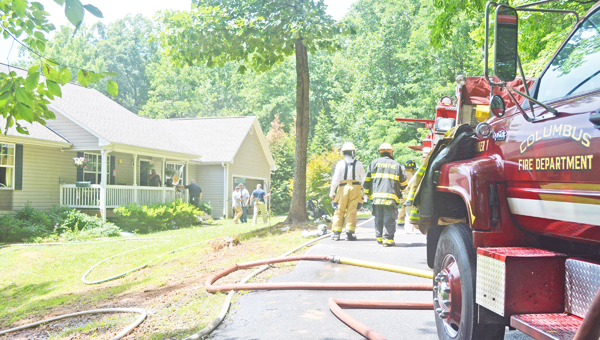 Emergency and public works personnel rushed to the aid of a Town of Tryon employee Tuesday afternoon when his home caught on fire.

“Tryon, Columbus and Saluda fire departments worked the fire, but just about all the public works employees came in to help,” Davis said. “They all really come together when something like this happens.”

Davis said the fire appears to have started in the basement causing damage downstairs and possible smoke damage to the first floor.

“The house is not a loss but definitely damage was done,” Davis said.

First responders were able to save the family dog and one cat, but could not save a second and third cat despite repeated attempts. Davis said the department gave CPR to the animals using reusable pet masks purchased several years ago through a fundraiser. According to Bulletin archives, the Tryon Fire Department first launched an effort to purchase the masks in September 2008. Davis said they have been useful several times since then.

The Morse family animals were taken to Bonnie Brae for further evaluation.

Also responding to the scene was Polk EMS.