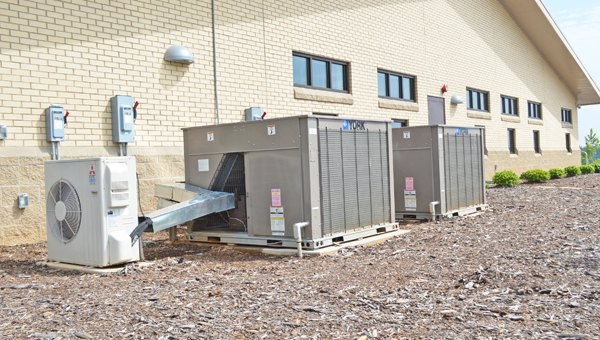 The DSS building’s air conditioning and heating system is just one of several things causing issues. (photo by Leah Justice)

County has withheld $75k of contract

The Polk County Department of Social Services (DSS) building has been occupied for a year and a half but there are still issues with heating, air conditioning, humidity and plumbing.

The Polk County Board of Commissioners has withheld $75,000 from the DSS building contractor, Able Construction, and has demanded that the North American Specialty Insurance Company honor its obligations under the performance bond to complete the contract, according to interim county manager Marche Pittman.

“We are working with the insurance company to ensure the project is completed promptly and correctly,” said Pittman. “Our main objective is to ensure that this facility will serve the needs of the citizens of Polk County for many years.”

The largest issues with the building include that the heating and air conditioning isn’t working properly and humidity has caused the doors to expand, preventing them from closing properly. In the winter, most employees have a space heater in their office to stay warm and in the summer some rooms are too cold and some hallways and rooms are too warm. The heating and air is not controlled with a thermostat but with a computer system, said DSS Director Lou Parton.

There have also been plumbing issues since employees moved into the building in December 2011. The sewer lines do not drain properly, which causes waste to back up into the showers and floor drains, according to Pittman. County maintenance staff is currently going to the building a few times a week to flush the toilets for about 10 minutes in order to clear the system. Other issues include painting that needs repair in the hallways, Pittman said.

County officials met with the bonding company last week to review a plan of action in order to correct the problems.

The DSS building, located off Wolverine Trail in Mill Spring, was the county’s first “green” building, with Parton saying the utility costs are much lower than the former building. The county moved the DSS department, as well as all county services, out of the Jervey-Palmer building in Tryon, which was the former St. Luke’s Hospital and had become aged and expensive to maintain.

During the commissioners’ last meeting held on June 17, resident Rickie McFalls asked commissioners when the issues at DSS were going to be fixed.

McFalls said the former board of commissioners said the issues were going to be fixed but they started worrying about the unified development ordinance (UDO) instead.

Pittman answered McFalls that he had a meeting scheduled later that week with the bond attorney and that the board of commissioners took action to invoke the bond. He said the county is meeting with several contractors who are working on the issues.

“So, we’re working on it,” Pittman told McFalls.

The county’s budget for the building was $2 million, while the contract with Able Construction amounted to $1,590,755. DSS was scheduled to occupy the building in November 2011 but weren’t able to move in until December 2011 with the county fining the contractors because the certificate of occupancy was not granted on time. Some of the delay was that the heating and cooling controls were not correct in the building and the soffit had not been installed on time.

Other problems that caused delays were that work on the soffit, or eaves under the roof had to be stopped near the end of construction because there was no insulation. Contractors had to spray in insulation prior to receiving a certificate of occupancy.

The approximate 12,000 square foot DSS is the county’s first LEED (Leadership in Energy and Environmental Design) certified building. The county financed approximately $1.85 million for the building with state and federal reimbursements at an estimated 61 percent expected over the building’s 45-year life.

The reimbursements over the years should ultimately mean the county spent approximately $750,000 for the building.