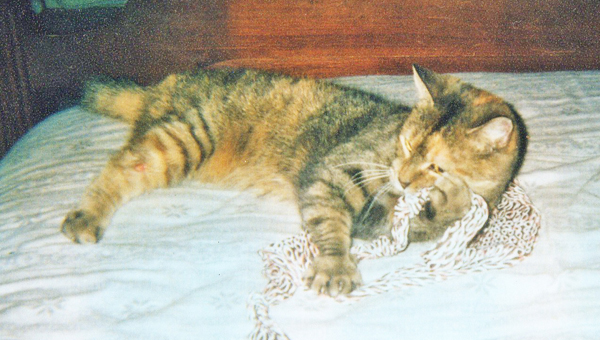 It was about five years ago when I first met Georgia, a little kitten whose leg had to be amputated.  Often ,when I’d visit, I’d find Elaine at Landrum vet carrying her around cradled in her arms. I have since learned to watch Elaine, where I’m concerned, she’s pretty sneaky. I couldn’t get the sweet thing out of my head, thus her tale was written, “Georgia On My Mind.”  Of course my dear friends, Bert and Jeanette had to have her and she soon became a treasured member of the Larsen group.

Georgia was always a tiny girl, perhaps 6 or 7 pounds, but she was fearless.  From the time she was a kitten, I would sing some part of “Georgia on my mind” each time I saw her and she’d come to expect it.  Georgia quickly became one of Papa Bert’s special kitties, sleeping in the crook of his arm. That is, unless Uncle Lennie came to visit. Georgia would push her way through all the other dogs and cats till she wound up at my feet.  “Other arms reach out for me,” I would sing as I picked her up.  “She really loves you Lennie,” Bert would say.  “That’s because she has good taste,” I’d reply in a banter that became a ritual.

A few months ago, Georgia began losing weight which, at her size she couldn’t afford to do.  Everything that could be done was tried for Georgia until it was finally learned that she had cancer.  My visits became more frequent and Georgia, who was now light as a feather, didn’t change her routine one iota, fighting her way to my feet.  I sang and tearfully picked her up, angry that I couldn’t help her.