Female in convertible takes police on chase through Tryon, Columbus

A car chase through downtown Tryon ended at the I-26 on ramp with police arresting a female suspect who had stolen a convertible from a Campobello, S.C. car lot. 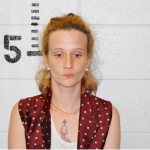 Rhonda K. Maddox, 35, of Landrum, S.C. was taken into custody and charged with possession of a stolen vehicle, felony fleeing to elude arrest, driving while impaired and possession of schedule II controlled substances and numerous traffic infractions.

The chase began when Lt. Scott Lindsey with the Tryon Police Department spotted the burgundy 1973 MG convertible with another car following closely behind her.

Randy Greene, owner of Campobello Cars, said earlier that morning he saw the woman pull up to the intersection across from his car lot in Campobello and thought, “You know, that looks like my car.”

Greene said he kept the car under cover of a carport and hadn’t even noticed the car was gone until then. When he saw the car at the intersection, he went to check on the convertible that should have been on his lot only to realize it was gone. Greene said he excused himself from his customer, jumped in his own car and began following the woman.

“I got in my car and caught up with her on the other side of Landrum High School. She wasn’t speeding or doing anything stupid,” Greene said.

Greene said he called the 911 dispatcher and kept them aware of what was going on. He said when he got to Tryon, he saw a police officer in about the middle of town, flashed his lights at the officer and pointed to the convertible.

Greene said the woman in the convertible pulled into the used car lot of Stott’s Ford before running a stop light and heading on toward Columbus.

As the driver of the stolen car entered into Columbus, the Polk County Sheriff’s Office and Columbus Police Department assisted with deploying stop sticks near Mountain View Barbecue to slow the vehicle, according to the Tryon Police Department. The stop sticks successfully resulted in all four tires being deflated.

The suspect continued a short distance attempting to turn onto Interstate 26 East, where the vehicle struck the guardrail and went a short distance down the ramp embankment, coming to rest next to the interstate.

Maddox is currently in the custody of the Columbus Police Department.