Auditions have been held, rehearsals have begun, and imagination and creativity are flowing at the TLT Workshop in Tryon. 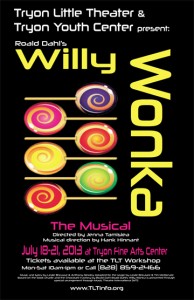 This year’s Youth Summer Production is “Willy Wonka”, based on the book “Charlie and the Chocolate Factory” by Roald Dahl.

Directing the show is Jenna Tamisiea, who directed last year’s blockbuster, “Seussical the Musical”. Tamisiea is also Co-founder and Artistic Director of the Greenville Light Opera Works (GLOW).  Assisting her with musical direction is Hank Hinnant.

As well as great characters called Willy Wonka, Phineous Trout, Veruca Salt and Augustus Gloop, there’s a slew of other notables like the Funky Oompa Loompas, Squirrels, School Children, and Wonkettes.  Filling these rôles are wonderfully talented locals – some you’ve seen before, and some who are new to TLT/TYC.

The show runs July 18-21 at the Tryon Fine Arts Center in Tryon, with ticket prices of $20 for adults and $10 for those under 18. So mark your calendars to come and see the “biggest and best candy empire the world has ever known!”