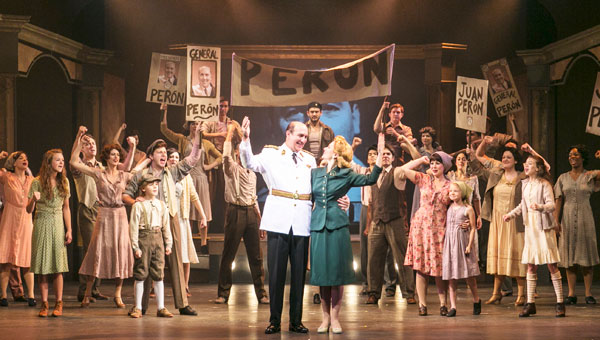 Flat Rock Playhouse presents Evita on its Mainstage through June 30. The musical chronicles Eva Perón’s Cinderella story of how she fought her way out of Argentina’s slums and eventually became the country’s First Lady. Adored as a champion for the poor, she is also remembered for her greed and ambition.
Starting as a rock opera album released in 1976, the production on London’s West End won the Laurence Olivier Award for Best Musical in 1978. The first British musical to receive the Tony Award for Best Musical on Broadway a year later, it became a major film starring Madonna and Antonio Banderas in 1996.
The show opens in 1952 with the announcement in a Cinema in Buenos Aires that Eva Perón has died. As the audience sings “Requiem for Evita,” Ché Guevara (Charlie Brady), the narrator, cynically assesses the country’s grief (“Oh What a Circus”). He then takes us back to 1934 when 15-year-old Eva (Anna Eilinsfeld) has her first love affair with tango singer Agustín Magaldi.
After she blackmails Magaldi to take her with him to Buenos Aires, he leaves her and Ché relates how Eva sleeps her way up the ladder, becoming a model, radio star, and actress (“Goodnight and Thank You”). He then introduces Colonel Juan Domingo Perón (Ronald L. Brown) as an ambitious military colonel making his way up the Argentine political ladder.
In a secret rendezvous with Perón at a charity concert for earthquake victims in San Juan, Eva convinces him she could help him rise to power (“I’d Be Surprisingly Good For You”).
When Perón is elected President in 1946, Eva speaks from the balcony of the Presidential palace to her adoring supporters (“Don’t Cry for Me Argentina”). In order to impress the people of Argentina, she tours Europe where she is adored by the Spanish, scorned by the Italians, and snubbed by the French and the British. Frustrated with Eva’s meddling, Perón’s generals demand that she leave politics but Perón claims they would never have achieved as much as they have without her (“She Is A Diamond”) and points out that she will soon succumb to her cancer.
The music by Andrew Lloyd Webber and lyrics by Tim Rice, feature some of theater’s most beautiful songs, such as “Don’t Cry for Me Argentina” and “Another Suitcase in Another Hall,” sung poignantly by Evita understudy, Jane Bunting, as the Mistress.  John Riddle also shines as Magaldi as his sings “On this Night of A thousand Stars.”
Although Eilinsfeld has a beautiful voice, it is unfortunately often lost to the tiresome necessity of late for Flat Rock Playhouse productions to require entire tunes to be belted Ethel Merman style. For the same reason, Brady also misses the mark vocally at times as Guevara and Brown lacks the voice to carry the role as Perón.
The set design by Dennis C. Maulden is wonderful and the choreography by Jennifer Jancuska for the Tango that illustrates Eva tantalizing Juan to marry her while singing “I’d Be Surprisingly Good For You” is provocatively well done.

TICKETS AND SCHEDULE FOR EVITA