Harrison Turnage of Tryon dreams of the day when he will lead soldiers. The high school freshman has started that journey by receiving the highest medal as superior cadet in his ROTC unit at Dorman High School. 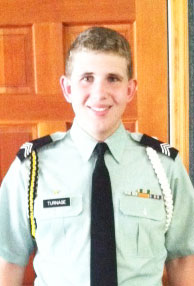 “Our country always will need a strong military, human nature being what it is. ‘Si vis pacem, para bellum.’ If you want peace, prepare for war,” Turnage said.

“I would like to be in Special Forces,” he declares. “I have aspirations to be all I can be, the best leader I can be. People can get wiped off the face of the earth by bad leadership, and someone has to step up and take the responsibility for doing all that can be done to provide their best leadership.”

Turnage recently read American Caesar, a biography of General Douglas MacArthur, written by William Manchester, and it made a big impression on him. MacArthur’s leadership of the Pacific forces in World War II emphasized saving American lives.

“Men – and women – don’t always go to war to be patriots. Sometimes they go because they see no other option,” Turnage said. “If all men were told that they faced imminent death, nine of 10 would run away. I want to protect and serve my country, but even more, I want to protect the men that I lead as we make the world a safer place.”

Cadets lead the ROTC program at his high school, and this year, Turnage has joined the color guard. Next year he plans to join the rifle squad. The physical training has begun.

“It will take physical toughness, mental toughness and mental discipline,” he said. “One day, we did 110 pushups. We did 15 four-count pushups, then another exercise, then more pushups for 90 minutes.”

Turnage has lived in Tryon all his life, and said he looks forward to traveling. He likes the Chinese language, and he’d like to go to China. He also likes all kinds of music – Beethoven, Mozart, Vivaldi, rock and roll, and heavy metal.

“I don’t like music that’s too sad,” he says. “I play alto saxophone in the marching band. I really enjoy John Philip Sousa, John Williams, Hans Zimmer. Music has been a big part of my life and I plan to maintain that.”

“I want to be a credit to my family, because I credit my family for how I’ve been raised. Both my parents work very hard every day, and that’s a lot of inspiration to me,” he says. “Several military people in my church, Tryon United Methodist, have given me a lot of support.”

When he was 4 years old, Turnage thought that garbage truck drivers had good work. As he got older, he liked the idea of being an inventor. Then, reading about the capture of Osama bin Laden, he began to ponder the possibility of a military career.

“What I want is to do good in the world,” Turnage says. “It won’t be easy, but if I don’t try, I will always wonder if I could have made a better difference.”