Tryon presents key to the city to Morris 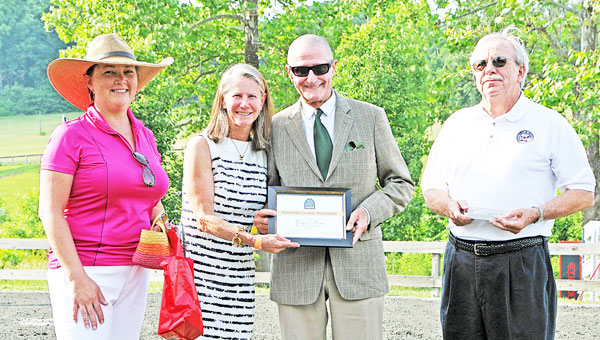 TR&HC Events had the privilege of hosting George Morris at its recent 85th TR&HC Charity Horse Show as a special equitation judge.

For the historic event, Morris returned to the community where he trained to be on the first civilian Olympic Show Jumping team in 1956 before the games in Stockholm. Special courses had been constructed for the Olympic riders to practice on at the Cotton Patch Farm and Harmon Field. The team returned for a second time in 1958.

George H. Morris is an American trainer and judge of horses and riders in the hunter/jumper disciplines, and is considered a “founding father” of Hunt Seat Equitation. He recently retired as the chef d’equipe for the USEF Show Jumping Team.

Morris began riding as a child. In 1952, at the remarkably young age of 14, he won the ASPCA Maclay Horsemanship Finals and AHSA Hunt Seat Equitation Medal Final at Madison Square Garden, making him the youngest rider to do so. He went on to train numerous riders at his Hunterdon stables, who won consistently on the East Coast.

Morris has represented the United States in many international competitions as both a rider and coach. In 1959 his team won the gold medal in the Pan American Games, and he won a team silver medal at the 1960 Rome Olympics. Morris rode on eight winning Nations Cup teams between 1958 and 1960. Morris’ students have medaled in the 1984, 1992, 1996 and 2004 Olympic Games. Morris has acted as chef d’equipe for numerous winning teams, including the 2005 champions of the Samsung Super League.

Originally published in 1971, and now in its third edition, Morris’ Hunter Seat Equitation is often recognized as the definitive work on the subject. Morris has also authored several other books and videos on riding and judging, including George Morris Teaches Beginners to Ride, A Clinic for Instructors, Parents, and Students, and The American Jumping Style.

Morris also writes a very popular column in the monthly equestrian magazine Practical Horseman, entitled “Jumping Clinic,” in which he critiques the jumping positions of photos, which have been submitted by readers.

Additionally, Morris serves on the USEF National Jumper Committee and Planning Committee, and is the president of the United States Show Jumping Hall of Fame.