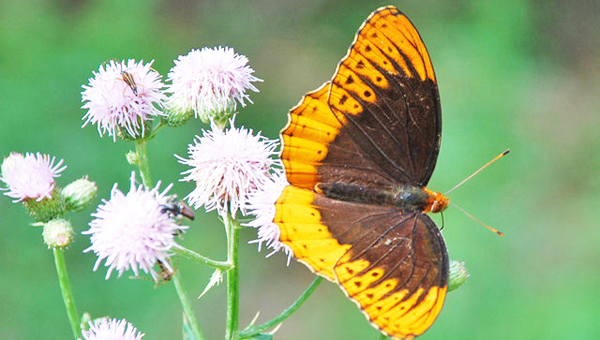 In a joint effort to expand the knowledge and understanding of the flora and fauna of Polk County, the Pacolet Area Conservancy (PAC) and botanist, David Campbell need your help in locating this month’s “Most Wanted—Animal,” Speyeria diana, also known by the common name, Diana Fritillary.

Diana Fritillary is an impressive and large forest dwelling butterfly. It is uncommon in North Carolina, a species of “special concern,” but it may be found in rich cove habitats in the mountains. It is ranked as “very rare” globally.

The distribution of this species is centered in the southern Appalachians, from central West Virginia and Virginia through the mountains of northern Georgia and Alabama. It can also be found west of this region, in the Ozark Mountains of Missouri, Arkansas, and eastern Oklahoma. Although the range of the Diana Fritillary seems widespread, its populations are dispersed and fluctuate from year to year.

In North Carolina, this forest-dependent butterfly is uncommon in the mountains and rare in the piedmont. Look for it along mountain roads near creeks at lower elevations, and at higher elevations, it can be found near glades along mountain forests or woods. Also look for it near fields, forest edges, and openings in moist, rich, forested mountains and valleys. Adults feed on dung and flower nectar from plants including common and swamp milkweeds, ironweed, red clover and butterflybush.