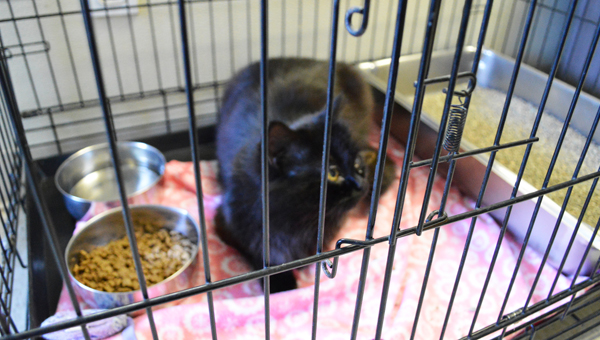 This is just one of the more than 1,000 cats Foothills Humane Society is likely to take in this year. FHS’ hopes to obtain additional funding from Polk County commission. (photo by Samantha Hurst)

Foothills Humane Society director Selena Coffey hopes information she’s provided Polk County commissioners over the past few days might sway their decision regarding funding allotted for the shelter in next year’s budget.

“I realize it is difficult to provide increased funding during these financially challenging times,” Coffey said in her intial request to commissioners. “But I earnestly feel that your investment in FHS is a cost-effective use of Polk County taxpayer dollars for animal control intake services and will continue to benefit the local economy in future years.”

During budget workshops, the majority of commissioners initially denied FHS’s request for a 15 percent or $14,580 increase. If approved, the request would have boosted the county’s allocation to FHS from $97,200 annually to $111,780.

“Is it absolutely critical? No, we would not have to shut down without it,” Coffey said. “But it’s a matter of we believe this is a very, very minimal request versus the service that we provide.”

Commissioner Ray Gasperson said he feels the other commissioners don’t realize the bargain Polk County receives for what FHS provides.

“The Foothills Humane Society is a huge benefit to our county and they provide a significant service,” Gasperson said. “They do a splendid job at a very low cost to the county.”

Gasperson said funding such a project would mean an increase of two to three cents in taxes in Polk County.

Coffey provided commissioners with a spreadsheet that she said showed an estimate cost were the county to fund its own animal shelter. She said she did this hoping it would offer perspective on what the services FHS provides are worth.

“We are doing a service for the county – we’re doing it at a very low rate compared to if the county operated its own shelter,” Coffey said.

FHS and Polk County commissioners came to a contractual intake agreement in 2012 that required the county to cover $83 per animal or $97,200 annually for two years. Coffey said the amount FHS is currently paying per Polk County animal intake totals $108.66 for the mandatory 72-hour stray hold period. The required increase would cover $95.54 per animal intake.