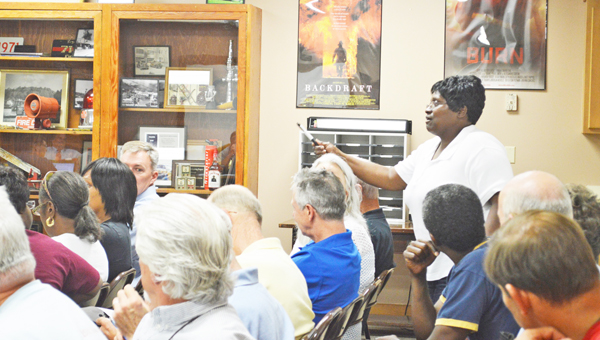 Though the consensus in Tryon Town Council’s meeting Tuesday, May 21 was that something must be done to alleviate Eastside resident Eunice Whitmire’s struggle with sewage flowing in and out of her house, no concrete decision followed beyond having city attorney Bailey Nager look into “legal solutions.”

Councilman Roy Miller said Whitmire has come before the council for years complaining about sewage water spilling into her yard.

“This is an issue guys that I think this lady has suffered enough,” Miller said.

“Which one of us could let a million gallons of sewer water run in our yard without contacting an attorney,” Miller asked.

Mayor Alan Peoples said the town has tried numerous things over the years to fix the problem. He said the Department of Environmental and Natural Resources (DENR) visited Tryon to make suggestions such as backflow meters and capping the manhole.

Eunice Whitmire said when town officials capped the manhole near her home the sewage came up in her yard, bathtub and toilets. When the second backflow meter was put into place it stopped the flow into the house but also prevented the 68-year-old from flushing her toilet.

“My yard is a mess – you go out there now there is yellow tape, it looks like somebody’s killed somebody right there around where the sewage was coming out, it’s so embarrassing,” Whitmire said. “Would any of ya’ll on town council be taking what I’ve been taking all these years?”

Whitmire said when a hard rain fell, causing water to back up in the toilet, she and her son would put on masks and gloves and clean those areas with Clorox. She said the town has never sent anyone into her house to clean her carpet because her family has never allowed the filth to get into the floor.

“I always take off my shoes when I go into the house because I don’t know what I’m taking in there … There’s a lot more added to this but I’m trying to hold my composure,” Whitmire said. “My grandkids, they don’t come down there and play no more.”

Chuck Cranford, supervisor over Surface Water Protection of the NC Division of Water Quality, said he couldn’t specifically speak to the health hazards at Whitmire’s property but said there are, of course, concerns.

“It is wastewater – it does pose a health hazard, so it’s certainly not good,” Cranford said.

Mark Prince with environmental services at the Polk County Health Department works with septic tanks around the county. He said certainly untreated sewage water could pose a risk. He said it could carry hazards such as fecal coliform bacteria or even hepatitis.

Prince said when septic tanks back up, for example, they call it a sanitary nuisance because the soil does some of its own work to kill bacteria. He said if it were to continue to happen however, “it could make someone sick, yes.”

Once the problem is repaired, Prince said the soil would be useable after a certain amount of time but he would not speculate as to an actual time frame.

The purpose of putting the lime on the soil is to raise the PH, which would kill off most of the bacteria that health officials would be worried about, he said.