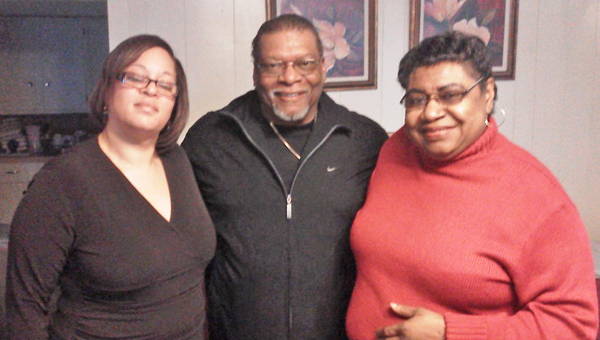 Lance Owen, father of Dana Owens, better known as Queen Latifah was in Tryon recently to visit his friend Anthony Suber, who recently moved back to Tryon.

Lance Owens and Anthony became friends while shooting the movie, “Joyful Noise” a couple of years ago. Queen Latifah produced and starred in the movie with Dolly Parton.

Suber was also on the crew for the first two seasons of the VHI series Single Ladies, also produced by Queen Latifah. Lance Owens is an integral part of the production team, with Suber saying he was flattered that Mr. Owens would take the time to visit him and his family in Tryon.

Lance Owens is a former police detective and Vietnam veteran who resides in the Pocono Mountain Region in Pennsylvania. Owens said that Tryon is a beautiful place and was shocked to learn that it is the birthplace of Nina Simone, whom he is a big fan of and coincidentally whose family he is familiar with in the Pocono’s. Lance Owens also met Sarah Miller, who is Suber’s mother.

“(Lance Owens) is a charming man who seems he never has met a stranger,” said Sarah Miller.

Suber said Lance and Dana Owens and their family are good people and when they invited him to the Pocono’s they treated him like a star while he stayed at Lance Owens’ estate there.

Lance Owens will be returning to Tryon soon to research this area as well as the Asheville area more.