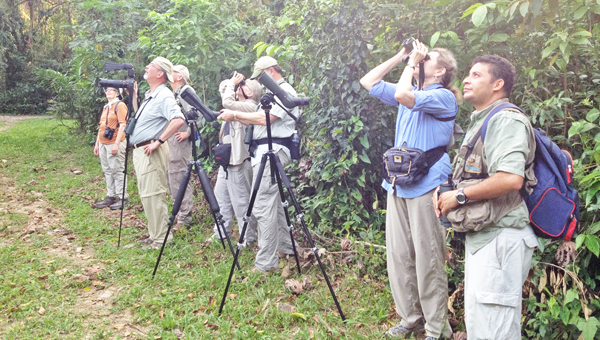 Birding in the forest. (photo by Simon Thompson)

I was sitting on the porch of my room watching the rain come down. It was not a little rain, but had been coming down in a constant downpour all morning. There were still a few birds around the property, but the majority of them were staying in deep cover to avoid getting soaked. Despite the noise of the rain on the roof and the constant dripping on the leaves, there were some birds calling from outside my door. Some were familiar notes, such as the short harsh notes of Kentucky and Hooded Warblers (both summer birds here in our area of the Carolinas), but others were distinctly tropical. Brown Jays are very noisy and their screams are easily heard above the steady drumming of the rain and Montezuma Oropendolas (large relatives of the Grackles) utter their bizarre gurgling sounds from the large trees around my cabin, while some rhythmic tooting announces the arrival of a Ferruginous Pygmy-Owl, a quite fierce diurnal hunter of small birds.

I was obviously not here in rainy western North Carolina, but in a forest preserve near La Ceiba on the north coast of Honduras in Central America, where we had two back-to-back birding tours at the very comfortable Pico Bonito Lodge. In just the first few days, we racked up a sizeable list of birds including such local specialties as Vermiculated Screech-Owl, Keel-billed Toucan and White-crowned Parrot. There are lots of birds here that never visit North America and spend their whole lives in the coastal forests in this part of the world. But the woodland and scrub habitat are also full of “our” birds, travelers from the northern climes that are spending the winter down here in the tropics.