Landrum’s Bridges to play Division I basketball at USC Upstate 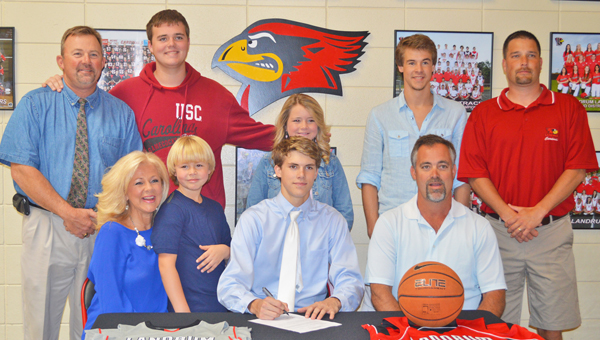 Landrum High School standout Daniel Bridges Thursday, May 9 signed to play Division I basketball with USC Upstate, realizing a long-term goal without having to travel far from home.

“Upstate felt like me – a better fit for me than the other schools I looked at,” Bridges said. “I think I can contribute a lot of discipline to the team. Coach [Lyn] Smith taught us all very well and I think that is going to help me a lot on the college level.”

Coach Smith applauded Bridges for his skill set and dedication to the game. He said USC Upstate gets a great player out of Bridges.

“He’s had an outstanding high school career,” Smith said. “He’s got a great skill set – can handle the ball well – and is very advanced in his understanding of the game.”

Bridges’ career at LHS includes 48 wins and only seven loses in two years. In those two years, the team has also won two conference titles, appeared in a final four and made it to the third round of playoffs.

Bridges joined the Cardinals two years ago after homeschooling most of his life. His father, Dean Bridges, said Daniel made a mature decision in coming to Landrum for his last two years of high school and he thinks he’s made a great decision in selecting USC Upstate as his college choice.

Dean said while homeschooling Daniel missed the consistent weight room experience other high school players may have gotten but said growing up with two older brothers, and six siblings in all prepared him well.