National Nurses Week: The high calling of the hospice nurse 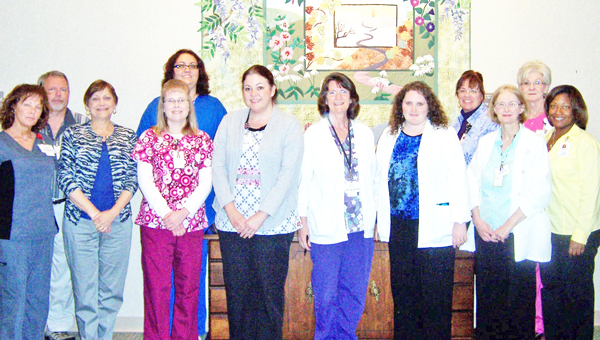 People pursue careers in nursing for many reasons: they want to help people, they’re natural caregivers or they want to do some good in the world. The 31 nurses of Hospice of the Carolina Foothills add another reason: It’s truly a ministry.

“Hospice is a calling,” Christina Hughes, RN said, “I knew several years ago that this is what I wanted to do, but watching my father pass that prompted me to make the change.”

Hospice nurses perform all the tasks you’d expect of nurses in a hospital, clinic or nursing home setting. They draw blood, administer and monitor medications, assess patients’ conditions, review charts, consult with doctors, complete paperwork, and attend staff meetings, among many other typical responsibilities. There’s an added dimension to working as a nurse at hospice.

“And,” adds Monica Pierce, LPN, “we do a lot of education with the families, teaching them how to take care of their loved ones.”

“Working for Hospice, you are able to spend more time with patients and families,” adds Joanie McDade, RN.

“Having the opportunity to build a relationship with some of the patients here is a gift no other job allows you to have,” says Barry Lowman, RN. “But then when they pass you have a piece of you go with them.”

Developing those close bonds with patients and families is not only an important part of the job, but it’s also one of the most enjoyable. And certain patients find a permanent place in the nurses’ hearts.

“I had one patient who served in Japan for 14 months as a medic. When he saw me, he asked if I was Asian. I told him that my mother was Okinawan and my father American. He began speaking Japanese to me. All throughout his journey of dementia, he continued to speak Japanese to me. There were times he couldn’t remember his wife’s name, but he remembered those few Japanese words,” says Hughes.

Homecare RN, Jennifer Greene tells how a simple gesture of gratitude left a lasting impression on her.

“I was taking care of a patient at the Hospice House and when I would give her any personal care, she would say, ‘Thank you, Mama.’ She would say that to me whenever I took care of her, until she passed.”

When Crissy Simpson, RN and Homecare clinical manager in South Carolina, first started at hospice, she found herself facing a potentially difficult situation.

“I was sent to see a patient that lived in a rural community. I was told that he was a very challenging patient, not because of his terminal illness, but because he may not be accepting of my race,” she says, “I went to visit him. He wasn’t rude, but asked a lot of questions to see if I was qualified to take care of him.”

After a few visits, the patient became comfortable with her, and Simpson would give him a big hug right before she left. If she got stuck in traffic and arrived a few minutes late, he would tell her he had been worried about her.

“Every visit he would be sitting in his recliner, facing the door, waiting for me to come, with his beautiful blue eyes,” she says.

As the patient began to decline in health, he asked his wife to buy Simpson a gift, a coffee mug that read, “Thank God for Daughters.”

“From that day, he called me his black daughter and he was my white daddy,” Simpson says, “Some people may be offended by that, but I know I meant a lot to him, and so did he to me.”

On the night he passed away, Simpson sang to him the old gospel song, “I’m Going to Take a Trip,” which she also sang at his funeral.

Just as Simpson goes above and beyond her job duties by singing to patients, other nurses contribute their talents and time outside of work. Jennifer Greene makes jewelry, donating necklaces and bracelets to patients, and Christina Hughes attends special events held at the facilities where she serves.

“One facility had ‘Cowboy Day,’ and the HCF social worker and I dressed up, and attended on our day off. The social worker even brought two of her horses for the patients to see,” says Hughes.

Every nurse has had a special person who inspired him or her to pursue the role of caregiver in life. For some it was another nurse who nurtured and mentored them, or a hospice nurse who ministered to one of their relatives. For others, a special family member encouraged them to follow their hearts. In RN Crystal Mitchell’s case, it was both. Her favorite aunt is a nurse and from a very young age, she would visit her at work in the hospital. Now, it seems, Mitchell is paying it forward.

“I’ve known since I was four I’ve wanted to be a nurse from watching her with her patients,” Mitchell says of her aunt. “I have had a similar role to a family friend who is like a little sister, and she is now a pediatric oncology nurse. I never knew I was the reason she wanted to be a nurse until later. How jaw-dropping it was to find out how much my work had influenced her by God’s grace.”

While working for hospice brings nurses many jovial moments, they also deal with the sobering reality of death every day. For that reason, many people hold them in high regard and wonder how they handle such a job.

RN case manager, Kim Griffey shares how people react when she tells them where she works.

“They always say that it takes a certain person to do your job, that they couldn’t do it. I always reply, ‘It’s very rewarding.’”

When asked what is the most important characteristic or skill needed to be a hospice nurse, one word comes up repeatedly.

Lowman and Travers and Pam Essman, RN, come right to the point.

“The most important characteristic you need to be successful in hospice is compassion. It’s not always the physical symptoms that you’re relieving, but also the patient’s and family’s psychological pain,” says Simpson.

When hospice nurses go to work every day, they’re not simply going to a job. They’re going to touch someone’s life. They hold patients’ hands, celebrate patients’ birthdays, play games, share stories, help patients create their life stories to leave for their families, offer comfort, a smile, a laugh, and, in some cases, a song.

“I have had so many patients say they look forward to the hospice nurse’s visit. What greater reward in life can we have than to put a little sunshine in someone’s day, maybe their last day,” Searcy says.