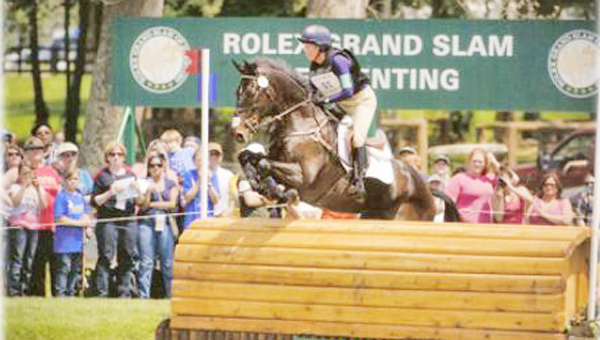 Rolex Kentucky is one of few four-star equestrian event in the western hemisphere and the highest level of competition, equal only to the Olympics. The Fédération Equestre Internationale (FEI) indicates the level of difficulty through the use of four asterisks (CCI****) and during this year’s event, every star lived up to its reputation.

Perkins did well during the cross-country phase as the conditions were fair and the obstacles challenging, with only half of the field of competitors actually finishing. Perkins and her 15-year old (17.1 h.) gelding-thoroughbred Sal Dali, spent the week at Rolex, which ran from April 25-28.

“This year was easier for me and much more fun than last year,” Perkins said. “I most especially want to thank my entire support group including Tryon House, and the many people who are behind me from Tryon, it makes all of the difference in the world. I’m just a small operation, so it means a lot to me to proudly display Morris the Horse on my saddle bag and blankets.”

Morris the Horse is Tryon’s beloved landmark, a shy little horse standing on the corner of Trade and Pacolet Streets.

Out of all of the events at Rolex this year, Perkins felt she did her best in the show-jumping competition. Perkins relies on Sal Dali, a Dark Bay, off-the-track thoroughbred, who began jumping at the age of 7.

Last December, Perkins broke her arm, and last fall, Sal Dali suffered a strained front leg. However this year, both horse and rider felt perfect, according to Perkins.

Dressage was a bit more challenging for Sal Dali, who Perkins said suffers from a noticeable amount of stage fright and tends to rush through the intensely scrutinized movements, which include the walk and rein back (stepping back five steps). In dressage, both horse and rider must become one with each other, as they carefully articulate every movement with fluidity and a supple disposition.

“Certain aspects of dressage arena cause Sal to become nervous, like the number of spectators, applause, loudspeakers, and the enclosed environment of the arena itself,” said Perkins, referring to her horse.

In cross-country, however, the game changes and those same distractions actually work to their benefit.

“I think that Sal believe that he’s actually galloping at the Kentucky Derby, and he gives it everything he has,” Perkins explained.