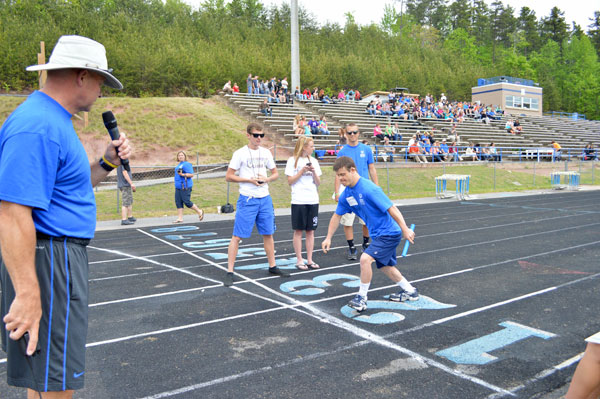 Brian Cabral (center) gets ready on Coach Bruce Ollis’ call to set off from the start line of the relay race. See more pictures on page 4 and at www.tryondailybulletin.com. (photo by Samantha Hurst)

They ran, they jumped and they threw softballs with gusto.

See our photo gallery at this link: https://www.tryondailybulletin.com/2013/04/30/special-olympics/

Event organizer Jane Ollis said she wanted to ensure that area athletes of all abilities and ages had an opportunity to show their talent on the track or field.

“I think this day was just amazing,” said Ollis, who for many years has organized the Henderson County Special Olympics. “The whole point was for the athletes to have a good time and they did.”

Led by the Polk County Honor Guard, participants marched in an opening ceremony to the cheers of bleachers filled with Polk County High School students, staff and parents. Participant Alex Sluder ran in the torch with law enforcement officials Seth Watkins, Jesse Chavez, Scott Hamby, Jason Sama and Michael Wheeler by his side.

After the ceremonial lighting of the torch, each athlete broke off from their teams to start their first competitions.
On the track athletes could compete in the 200-meter run, 400-meter run, 200-meter walk, 4×100 relay, 4×400 relay and wheelchair races, among other events. On the field they tried their hands at the tennis ball throw, softball throw and shot put.