Where do I turn to now?

Nothing frustrates me more than when a beautiful, viable and loving dog that has proven itself in every way, has trouble finding a home. 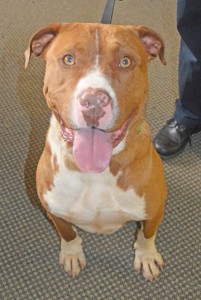 Staked to the ground for a whole year and so full of mange, you couldn’t find a speck of hair on him. Rescued and brought to Landrum vet, it took seven long months to eradicate all the mange mites and heal all infections. What emerged was this magnificent pit-mastiff who was confused with life and trusted only his handlers.

It was time for Soldier and me to have a talk, so after the second day of working with him I went into his cage and sat down. Soldier took his treats but sort of kept his distance. “Listen big fella, I know you’ve had a raw deal and have been around some pretty stupid humans, but we’re not all like that.”

Soldier inched closer and listened as I went on, “I’m going to make you a promise that I’ve made countless times before.” “What is that, Uncle Lennie?” Soldier asked. “If you learn to trust again and treat people with the love I know you have in you, I promise you’ll never be hurt again and I’ll do all in my power to find you a forever home.”  Soldier came over and put his head in my lap, “that’s the dog I want to be Uncle Lennie.”  I wrapped my arms around him and wept because the encounter reminded me so much of when I first met Monty, my precious doggie angel.

True to his word I can attest that in the nearly four months since that encounter no one has heard neither a single bark of anger nor an ounce of aggression toward any living thing. On the contrary, Soldier is friendly and loving to everyone. For the past three and a half months he has been at Dogwood Farms where Josh and Astrid have been helping to find him a forever home. Though Josh and Astrid are more than fair to me, his board and care still must be paid, but it was worth it to see him run and interact with so many other dogs. Soldier began to think that Dogwood Farms was his forever home and lamented going back into his kennel instead of into the house with their dogs, Belue and Kara along with the family.