Recognizing early signs of laminitis and colic in horses 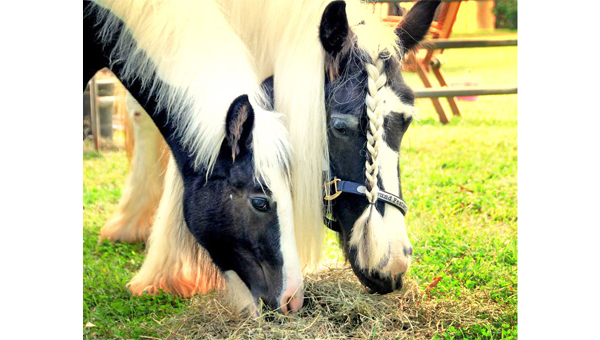 Horse owners should be caucious about laminitis and colic in the spring. (photo by Kirk Gollwitzer)

As the spring days become warmer, and the grasses grow thicker and greener, many people are suffering from the uncomfortable effects of grass and tree pollen. At this time each year, it is important that horse owners pay particular attention to the grazing habits of their herd. Harmful effects of a sudden high-calorie intake, coupled with increased levels of sugars, caused by photosynthesis, can have detrimental effects on horses.

With the slightest change of color in the spring grass, horses will instantly notice and begin to take full advantage of even the smallest pieces of greenery. With just a few more doses of rain, grass and weeds will begin growing rapidly, and this will be the time when care takers should pay particular attention to the diet of their horses. While there are many things to watch out for during the spring, topping the list of concerns are laminitis and colic, which can, if left untreated, result in devastating consequences.

While many horses seem to be immune to the increased levels of sugars and grass volume, others are highly sensitive. Horses with a propensity for chronic laminitis react differently to the increased amounts of sugar in the vegetation they consume. The delicate laminae tissue on the souls of the feet become inflamed and begin to change with respect to the neighboring coffin bone.

Owners should periodically inspect the feet of their horse for sensitivity, color changes, and temperature differences. When horses begin to show signs of laminitis, owners must contact their veterinarian immediately, and move to corrective measures with regard to treatment and diet plan. If laminitis is ignored, it can progress into a foundering situation, or a coffin bone rotation, which is very serious, resulting in severe lameness and sometimes death.

According to Dr. James Orsini, associate professor of surgery at the George D. Widener Hospital for Large Animals, New Bolton Center, “The horse standing in a founder stance, will attempt to decrease the load on the affected feet.  If it has laminitis in the front hooves, it will bring its hind legs underneath its body and put its forelegs out in front.”

Another warning, with regard to the consumption of the rich spring grass, has to do with weight management and colic prevention, which is caused by increased amounts of gas or a sudden impaction of grass, hay, water and grain. During the spring and summer months, horses can eat up to three to four times what they would normally consume during cooler seasons. Owners must monitor caloric levels and strive to balance their intake with the digestive output. Colic, on the other hand, should not be considered a mere condition of discomfort, but the leading cause of premature death in the domestic horse population.

By paying strict attention to your horse’s comfort profile, during a time that should be considered the colic-season, horse owners can catch this potentially fatal condition early. Frequently, horses that are experiencing the discomforts associated with colic will stand in awkward positions, appearing to contort themselves to a point of relief. Other horses will moan, attempt to urinate, stretch, roll, pace, lay down and rise more often. Anytime a horse appears to take on an odd physical stance, closer examination is called for, along with immediate contact to a veterinarian.   “Although colic surgery was considered hopeless 60 years ago, today it can save horses from the devastating diseases and give them a long life, free of complications and recurrence,” said David E. Freeman, MVB, PhD.

Horses, as humans, suffer from the similar effects of tree and grass pollen, in their eyes, skin, digestive and respiratory systems. Veterinarians can prescribe similar treatments for the relief of these seasonal discomforts, with a full line of equine antihistamines, anti-inflammatory, eye drops, and other drugs.