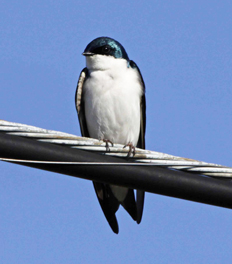 The first Tree Swallow has arrived, but winter is often fickle at this time of the year and it’s a debate as to whether the bird has arrived too early and won’t be able to find enough food before spring finally shows her face.

If this individual swallow does survive, he will (and all probabilities of an early arrival point to it being a male) get the best breeding site available. He will get first choice of the nest cavities in the area and maybe the first choice of the arriving female Tree Swallows.

Many swallows are amongst the first birds to arrive each spring, and the first Tree Swallow is usually seen in our area as early as the last week of February or the first week of March, while the first Barn and Northern Rough-winged Swallows will arrive about two to three weeks later.