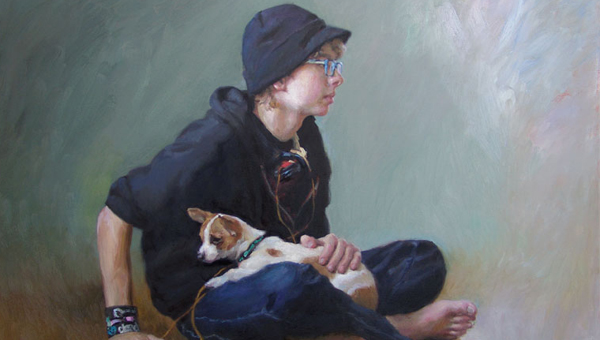 Richard Christian Nelson’s Portrait ‘Luke At 15’ Is Finalist In Portrait Society Of America’s 2013 International Portrait Competition. Twenty finalists were selected from more than 2,000 entries from all over the world for this prestigious competition. The finalist’s paintings will be be brought to the annual PSOA conference which takes place in Atlanta this year, on the weekend of April 25-28. Final prizes will be awarded at a banquet there Saturday evening.

Although Nelson has won a number of honors and awards from the Portrait Society, this is the first time his work has been selected as a finalist. This is a portrait of the Nelson’s oldest child Luke. Kim actually had a dream and woke up and told Rich that he “had to do a painting of Luke with his current look.” It also features their chihuahua pup ‘Finn’. Luke named him, and says Finn likes him best, although Lily and Sam might take exception to that. About the somewhat counterintuitive age of the sitter (you don’t see a lot of portraits of teens) Nelson says “It’s interesting to me that we make this transition from child to adult. It’s such a fascinating thing in so many ways. As parents we have less and less control. I structured this painting with more symbols than usual. Besides Luke’s clothes and things like headphones and wristbands, I wanted it to have a feeling of ‘light’ and ‘dark’, hoping and trusting that he moves evermore with and towards the ‘light’”.