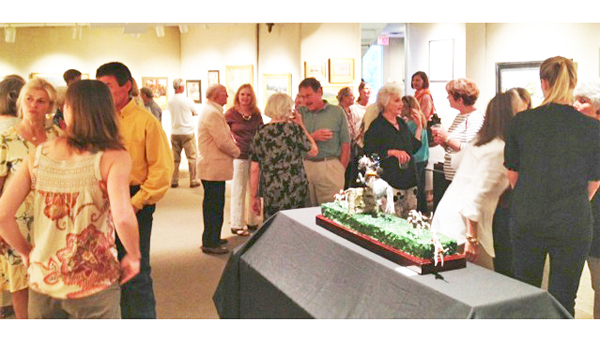 The “Block House Equestrian Art Exhibit” opened at the Tryon Fine Arts Center on Saturday, April 13 to a full house of equestrian and art enthusiasts alike.

The show comes down April 26.

Exhibit organizer Kim Nelson of Skyuka Fine Art said she was thrilled with the way the show came together.

“I’m really proud of the way the show is hung and how stunning it looks,” Nelson said. “Between the bronzes and historic artwork and the loaned collection, this exhibit really is something to be seen.”

There are almost 100 works of art to be enjoyed in the exhibit, which features works for sale as well as work loaned by local collectors. Nelson said finding the right artists to exhibit was where the hard work came into play.

“I was seeking out the quality of artwork we wanted to represent at the show, not necessarily the name,” she said. “But we were privileged to have many well-known equestrian artists.”

The show consists of works from such artists as painter Valeria Hinz of Canada, Tucker Bailey, a sculptor of Minnesota, and Linda Luster, director of the North Carolina Museum of History. It also includes works by Nelson’s husband Rich Nelson,  who collaborated with equestrian photographer Erik Olsen on several pieces, and local sculptor Sarah Holmberg.