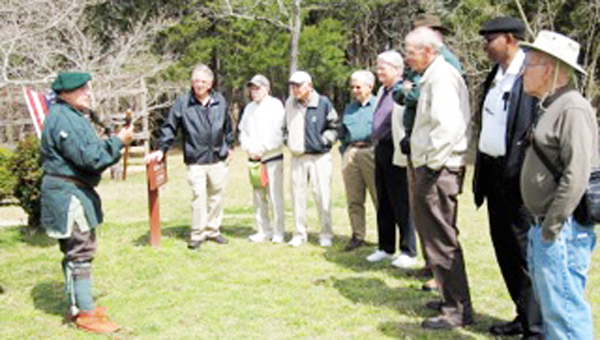 A senior men’s group from Tryon Estates recently visited the historic Walnut Grove Plantation in Roebuck, S.C. Zac Cunningham, director of the Walnut Grove Plantation and Historic Price House, hosted the group. The outing was led by Ralph Collins, a resident of Tryon Estates, and Tom Foster, a staff member. From the plantation’s literature: “Walnut Grove Plantation tells the stories of the free and enslaved people who settled South Carolina and the rest of Britain’s American colonies, fought for independence, and in the end built a new nation. Among the first to settle this area of the backcountry (as South Carolina’s tough western frontier was then called), Charles and Mary Moore established Walnut Grove on a 550-acre land grant about 1763.” The plantation and the area around it saw much conflict during the Revolutionary War. The plantation’s literature goes on to say: “Local militia troops mustered at Walnut Grove before joining American forces at the Bottle of Cowpens in January 1780.” The plantation’s buildings have been maintained in excellent condition and the group further heard stories from a reenactment frontiersman soldier from the period as shown in the photo. Following the tour the group enjoyed lunch at the Beacon Drive-In in Spartanburg before returning to Columbus. For further information about the plantation, visit spartanburghistory.org/walnutgrove.php. (photo submitted by Frank Collins)