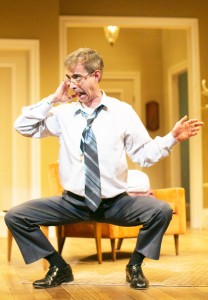 Directed by Kate Galvin the comedy plays through April 21, and features local actors, Charles Flynn-McIver and Scott Treadway, who play the hilariously mismatched roommates, Oscar Madison and Felix Unger. Other cast members include Laura Woyasz and Ellie Mooney as the zany British sisters, Gwendolyn and Cecily Pigeon, in the apartment upstairs; and the motley poker crew, Michael MacCauley as Murray, Ralph Redpath Roy, Peter Thomasson  as Vinny and Gary Littman as Speed.

Following its premiere on Broadway in 1965, the play has endured many successful revivals: a 1968 film and 1970s television series, as well as other derivative works and spin-offs, including the Simon’s 1985 female version. Although the plot, about two friends who become roommates after their marriages fail is mundane, Simon’s comedic take on how the neat, uptight Felix and the slovenly, easygoing Oscar interact (and their poker playing friends react) is hilarious.

Treadway plays Felix Unger with his usual comedic aplomb, portraying the character’s compulsive neat freak nature with refreshing style, albeit with a bit over-the-top physical comedy. Flynn-McIver’s Oscar Madison, however, is less believable, partly due to his physical appearance, which does not convey the messy, undisciplined sportswriter. Although he mostly hits the mark to get the laughs, it often sounds like he is imitating Walter Matthau, who won a Tony Award for Best Actor in that role. Woyasz and Mooney play the Pidgeon sisters to a tipsy tee and Littman, a newcomer to the Playhouse, shines as the irreverent Speed.

Although Galvin may have miscast a few roles, she directed the physical comedy quite well. Dennis C. Maulden’s scenic design worked very well with the lighting design by Stephen Terry and Kimberlee E. Winters. Overall, the Flat Rock production provides a night that is entertaining and funny.