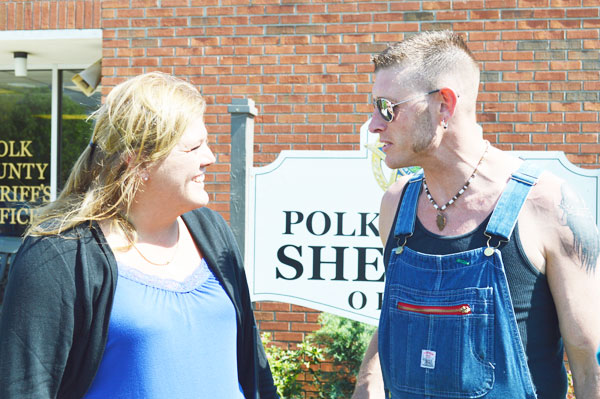 The Polk County Sheriff’s Office (PCSO) has teamed up with local producer Brook Hannon and local celebrities Moonshiner Josh Owens and Bootleg Bill Canny to raise money for one of its own.

“I watched my daughter almost die in front of me,” Bayne said. “When she bled out 10 days after surgery… I mean, you hit your knees and tell God take me not her.”

Cash, a 21-year-old student at USC Upstate, was diagnosed a year and a half ago with Cushing’s disease and underwent surgery to remove a tumor in her brain.  Last month she went back to Emory Hospital in Georgia where she was diagnosed with another brain tumor.  The surgery is of high risk but is Cash’s only option of survival as there is no cure for Cushing’s disease.

The sheriff’s office held a press conference Wednesday, April 10 to announce its plans. The first benefit will be held on Monday, April 15 from 5-8 p.m. at Mountain View BBQ.

PCSO officers and staff will serve customers with all tips and a portion of food sales going to the family.  Mountain View’s full menu as well as take-out orders will be available.

On May 4 at the Party Place and Event Center in Saluda, rising country music artist Maggie Rose will perform a benefit concert to help raise money for Cash.

Rose is ascending the country charts with her hit single “I Ain’t Your Mama” off her debut album “Cut to Impress.” Doors for the concert open at 3 p.m. with local band performances taking the stage. Maggie Rose performs at 7 p.m.
Officers said Bayne would never ask for help, so they secretly started planning the benefits.

“Well there’s so many people I feel like may need help more than Heather does and I didn’t want to take away from them,” Bayne said.