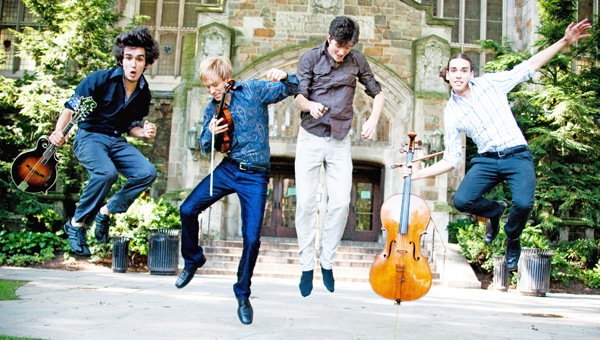 “Outstanding Michigan Celtic-jazz-bluegrass fiddle wiz Jeremy Kittel” (The Boston Globe) will lead The Jeremy Kittel Band on stage at Tryon Fine Arts Center Thursday, April 18 at 8 p.m. Besides Kittel, the Jeremy Kittel Band is comprised of Josh Pinkham, mandolin; Nathaniel Smith, cello; and Simon Chrisman, hammered dulcimer. With all the intricacy of great chamber music, blended with fiddling, jazz, soul and blues, these young and dynamic musicians have been captivating audiences around the country. Tickets available by calling 828-859-8322 or visiting www.tryonarts.org.

The band also features Josh Pinkham (mandolin), Nathaniel Smith (cello) and Simon Chrisman (hammered dulcimer). Together they make up an exceptional quartet whose musical roots come from all over the world. With the drive of Celtic fiddling, spontaneity of jazz, soul of the blues and intricacies of chamber music, the Jeremy Kittel Band consistently captivates audiences throughout the United States.

Kittel is one of the foremost of a new breed of fiddlers and violinists who easily navigates between a multitude of musical styles and traditions, continuing to break new ground and redefine the role of his instrument. Kittel has toured and recorded with such musical giants as Mark O’Connor, Bela Fleck, Edgar Meyer, Chris Thile, Paquito D’Rivera, the Assad Brothers, Stefon Harris, My Morning Jacket and Darol Anger. He has appeared on the NPR radio show A Prairie Home Companion, has been a guest performer with multiple symphony orchestras, and has performed at venues as diverse as Carnegie Hall, the Kennedy Center, Bonnaroo and the Telluride Bluegrass Festival.