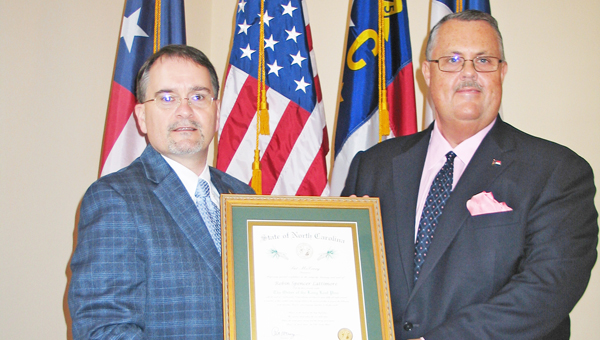 Robin S. Lattimore, former associate editor of The Tryon Daily Bulletin, was presented the Order of the Long Leaf Pine on behalf of North Carolina Governor Patrick L. McCrory on Sunday, March 24. The ceremony was held in Rutherfordton and hosted by the Rutherford County Historical Society.

The Order of the Long Leaf Pine is among the highest civilian honors that can be presented by the governor to a citizen of the state. Notable recipients include Billy Graham, Andy Griffith, Charles Kuralt, Richard Petty, Bob Timberlake and Michael Jordan.

Former Rutherford County Sheriff C. Philip Byers nominated Lattimore for the honor in recognition of his work as a historian, educator and author. Lattimore’s portfolio of published works includes more than 20 books that celebrate the history and heritage of Rutherford and Polk counties.

In addition to his work as an author, Lattimore recently served as the chief historian and commentator for the PBS documentary “Gold Fever and the Bechtler Mint,” produced by UNC-TV in 2012. He is a three-time winner of the North Carolina History Book Award and has received the Henry Timrod Southern Culture Medal for Literary Achievement. He was named the North Carolina Historian of the Year in 2009.

Lattimore was a staff member of the Tryon Daily Bulletin from 1995-2000. During that time, he earned five writing awards from the North Carolina Press Association for the newspaper. He lives in Rutherfordton and is currently writing a history of Rutherford County (including present-day Polk County) during the American Revolutionary War focusing on the life of Col. Andrew Hampton and the Battle of Kings Mountain.