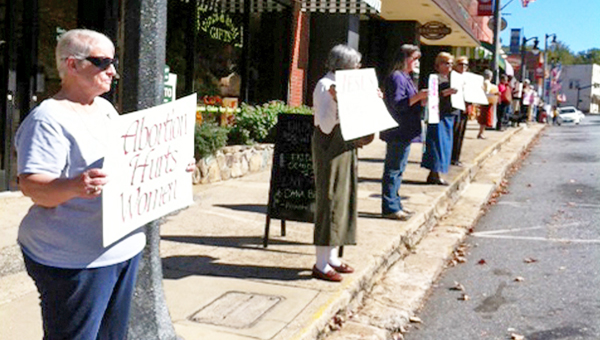 The Town of Tryon is considering amending its town code to  regulate pickets, demonstrations, parades and protests with careful drafting to ensure the language does not restrict anyone’s First Amendment right to free speech.

Council met March 19 and reviewed a draft ordinance to be included in the town’s code that would require a notification be submitted and restrictions regarding how close a picket, protest, demonstration or parade could be in front of open businesses.

The issue of the need for picketing regulations surfaced following an October 21, 2012 demonstration downtown where more than 50 members of St. John the Baptist Catholic Churched gathered along the sidewalks holding signs against abortion.

Commissioners met the next month and asked if there is anyway to regulate future protests with some saying there was an issue with the demonstration blocking businesses.

The town’s current draft amendment to the code says picketing may be conducted on public sidewalks, town-controlled parks or other town-owned areas normally used or reserved for pedestrian movement, including easements, but should not be conducted on roadways used for vehicular traffic or at a location directed, focused or targeted at a particular private residence.

Regarding businesses, the current drafts states that picketing shall not disrupt, block, obstruct or interfere with pedestrian or vehicular traffic or the free passage of pedestrian or vehicular traffic into any driveway, pedestrian entrance or other access to buildings which abut the public sidewalk. Commissioners discussed the distance picketers can be from the entrance to any open business with the current draft saying picketers shall not station themselves within 10 feet of an open business. Some commissioners were more in favor of restricting that distance to 20 feet from an entrance.

Commissioner Roy Miller said he’s pro-business and hears what others are saying about restricting protests in front of businesses, but he doesn’t want to violate anyone’s constitutional right. He said he’d like a little more time before restricting to 20 feet in front of businesses. He mentioned in the late 1990s that the Ku Klux Klan walked down Main Street in Tryon with a parade, so there has been other demonstrations here and “I’d hate to willingly go into something that may be unlawful.”

The draft also includes restrictions to placards, signs, flags or banners that might be carried by individuals during a picket.

“Written or printed placards or signs, flags or banners carried by individuals engaged in picketing shall be of such a size and/or carried on the sidewalks or other town-owned areas as to allow safe and unobstructed passage of pedestrian or vehicular traffic,” states the draft restriction. “The staff or pole on which a sign, flag or banner may be carried shall be made of corrugated material, plastic or wood and shall not exceed 40 inches in length and shall not be made of metal or metal alloy. If made of wood, the staff or pole shall be no greater than ¾ inch in diameter at any point. A staff or pole must be blunt at both ends.”

Town attorney Bailey Nager suggested that the town hold a public hearing in April and adopt something in May. The town plans to place the full draft on its website prior to a public hearing at www.tryon-nc.com. Copies are also available at town hall.