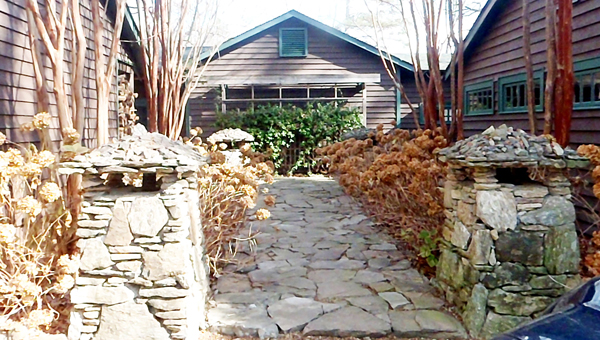 The rambling 1928 Craftsman bungalow on Lake Lanier known as Rock Crest, is the house that a local physician chose as “The One” when he came back to the area to open up his medical practice.

His bungalow is one of only two or three built on Lake Lanier in 1928, then the depression hit and building stopped on the Lake until the 1950s.

Old houses seem to acquire a soul while surviving their rambling histories and this home is no exception. While is a “shambles” when the owner acquired it – walls in dire need of painting, chopped up rooms and the view of the Lake from the stone terrace was obscured by trees and vines allowed to grow out of control.  The owner enlisted the help of designer Stephen Shadley, a family friend, to redesign, but, keep the integrity of what was once a simple little bungalow.  The resulting additions proceeded in meticulous fashion and look original to the home.

The owner is a prodigious collector and has decorated his home with inherited furniture and heirlooms as well as objects that he collected during his years abroad with the Peace Corps.  The ceilings had to be raised two feet to allow for the antique bookcases as well as the enormous elephant umbrella from Nepal. Room was created for the Whitney piano, whose action was built by his great-grandfather.  Alvin Whitney’s old mahogany workbench has a place in the sitting room.  The master bathroom sink is from the Grove Park Inn. The dining room table was brought over from India by the owner’s brother who was in the Foreign Service.

The many antiques and collectibles both local and from overseas have given the home’s, timeworn look and visitors will be in for a treat when they visit this historical bungalow on Lake Lanier, one of five homes on this years home tour.