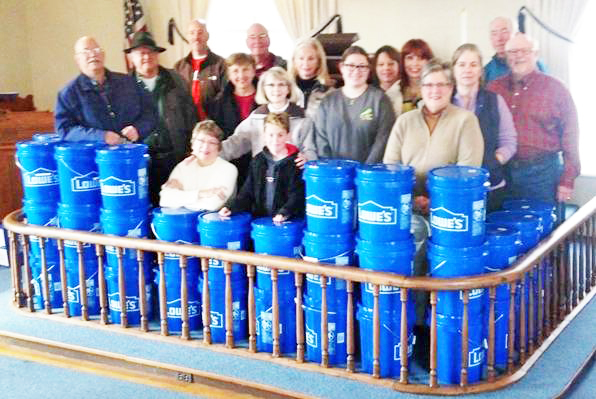 A few snowflakes on Saturday weren’t enough to deter several members of “the bucket brigade” from Jacksons Grove United Methodist Church from accomplishing their task.

It was another storm they were concerned with – responding to the needs of people whose lives are still in turmoil from Super-Storm Sandy back in October 2012.

Late in 2012, UMCOR – the United Methodist Committee on Relief – sent out an urgent plea for help when their warehouses began running low of buckets of cleaning supplies. These cleaning buckets are used by volunteers sent into devastated neighborhoods affected by hurricane Sandy and other natural disasters. The buckets contain a fairly specific set of items that just fit inside a five-gallon bucket.

When Hurricane Sandy hit the northeast in October, the UMCOR warehouse was still trying to restock their supply of cleaning buckets after a string of natural disasters across the country going back to Hurricane Katrina in August of 2005.

Recently, a group of UM pastors in northern Spartanburg County were considering ways to encourage their congregations to join with each other in worship and collaborate in mission.  Representing the Spartanburg District’s Connectional Ministries Team, the Rev. Ron Towery, pastor of Campobello, Fingerville and Liberty United Methodist churches convened a group of other ministers to plan a joint program. The idea was floated to give churches an opportunity to work together on a project of helping to re-supply the UMCOR warehouses.

The project, which will culminate in a Day of Service and Worship on Feb. 24 at New Beginnings UMC in Boiling Springs, involves having each of at least 14 UM churches gather supplies to fill cleaning buckets. The initial goal was that the 14 churches together would provide a total of 40 buckets.

Jacksons Grove Church was asked to supply 40 cans of air freshener and 20 bottles of laundry detergent. Marilyn Ochs agreed to coordinate the effort. As the pastor presented the idea to the church it was obvious that the folks at Jacksons Grove church thought that the goal was woefully anemic. The organist, Becky Oliver, challenged us by offering to purchase 40 empty buckets herself if the rest of us could come up with the items to fill the buckets.

Then Ivey Sumrell asked, “How much does it cost to purchase and fill one bucket?”

The pastor said according to the UMCOR website the cost is about $55. There was broad consensus the church could meet the challenge. Jacksons Grove Church had decided to provide not just the items requested to take to the event on Feb. 24 but would also collect, assemble and take to the event an additional 40 buckets. Practically everyone became energized by the challenge. People made monetary gifts, some gathered supplies and others volunteered to help pack the buckets.

Area store managers were very supportive of the effort as well – donating many of the items that were needed. Then, 17 people met at Jacksons Grove on last Saturday during the snow “storm” and filled 40 buckets – from all empty to sealed lids in 19 minutes.

So, in addition to the 40 cans of air freshener and 20 bottles of laundry detergent, Jacksons Grove UMC Bucket Brigade will deliver to the program on Sunday 40 filled buckets ready for shipment. There they will join members of the other 13 churches in the area as they fill at least an additional 40 buckets and have a time of celebration, worship and dedication.

The program that will be at New Beginnings UMC in Boiling Springs on Sunday, Feb. 24 from 3-4:30 p.m. will feature singing by the Spartanburg Methodist College Troubadours, displays of church supported missions in the Spartanburg area including ARCH ministries, The Bethlehem Center, Asbury Hills Camp and Retreat Center and others.