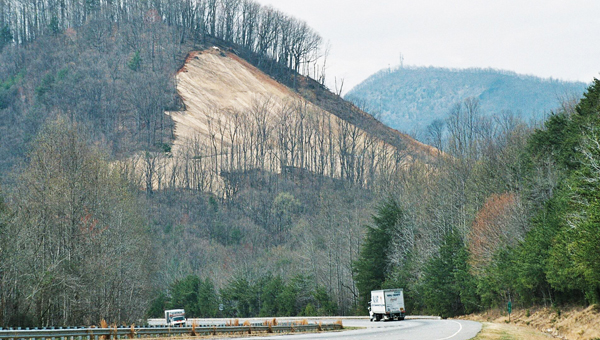 Developer said regulation was the problem

A developer and residents debated during the county commissioners meeting Feb. 4 what caused the Chocolate Drop development to fail.

Chocolate Drop has been a heated topic of discussion since 2007 when the mountain was cleared for a subdivision and erosion problems occurred. Some say Chocolate Drop is the reason local leaders enacted new ordinances for the county’s mountains.

Commissioner Keith Holbert invited Mitch Stott to the meeting to give the county the other side of the story. Stott, who was the local developer of the property, said he has made a number of attempts over the years to state his case but it seemed to always fall on deaf ears.

He said he is a lifelong resident of Polk and his family’s heritage runs deeper than most anyone in the commissioner’s room. His mother’s kitchen window overlooks Chocolate Drop Mountain, he said.

“I assure you that me as a developer, there was no intent to destroy that mountain,” Stott said.

He said he’s read countless newspaper submittals saying if there were only regulation, this wouldn’t have happened.

“Regulation is the problem,” Stott said. “That mountain was built and sculpted and carved to the exact detail of what the NCDENR (N.C. Department of Environment and Natural Resources) imposed.”

“Regulation, policy, cram it down our throat,” Stott said. “We went ahead and built it with those regulations.”

Laura Herbert, regional engineer at DENR’s Asheville office said although she was not part of the Chocolate Drop process, DENR has minimum requirements for slope stability and her office does not tell people what to do.

DENR makes sure there is proper sediment and erosion control, Herbert said, and has minimum standards for slopes, such as wanting them packed correctly, making sure they are not too steep or too vertical. DENR reviews a development’s sedimentation and erosion control plan as well, she said.

“The bottom line is those slopes failed and (developers) constructed them,” said Herbert.

Lawsuits were filed against Chocolate Drop developers (LGI Land Group), including from DENR. DENR’s lawsuit ordered that LGI fix erosion and sedimentation issues on the property.

Other lawsuits were filed from lot owners who claim they were sold land that could not be built upon. Stott’s comments on Chocolate Drop drew a few residents to the lectern who disagreed with him.

Getting ready for takeoff