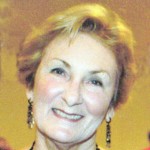 Pat graduated Van Nuys High School and attended Van Nuys State College. Pat and her husband Andy returned to Atlanta, Ga. in 1961 where they were residents until moving to the Tryon area in 1999. Pat was a long tennis player in the ALTA amateur tennis league, where she and her team at the Atlanta Athletic Club won the ladies city double championship several times. Her cooking talents were notable and she assisted with the publishing of “Atlanta Cooks for Company” an Atlanta High Museum cookbook in which several of her recipes are included. She was a member of the Decatur Cotillion Club, where she served as president and assisted as the organization became the Dekalb Junior League.

Pat’s true love was in the world of equine activities where she competed for many years in three-day events and dressage on the Florida, Georgia and the Carolinas show circuits. Beginning riding and showing in her early years of high school in California, she and her horse “Miss Priss” won many ribbons through those formative years. While in the Tryon area she trained with Sue Terrall and Erik Herbermann on her large Dutch Warmblood “Jericho” in the fine art of Dressage. She always felt at home in the ring on her horse or in the field hunting with Green Creek Hounds on her paint “JR”.

The family and mothering of her four children was a primary interest of Pat where she was always on the move serving as mentor and driver for many activities and events. A leader of a Girl Scout troop, soft ball coach, church camp leader, chaperon for trips and outings, plus all the friendship and nursing required by her children and other’s children gave her little time for her personal interests until moving to Tryon.

Pat fought her disease, breast cancer, for eight long years and was always positive and seldom complained about the painful ravaging effects that she felt. She loved flowers and always felt at home in the garden as a “Master Gardener” and seemed to feel at peace while tending her many pots of flowers.

The holidays this year were spent with her family and enjoyed by everyone. The memories were special and will be remembered for a long time. She will be missed by her family, friends, her 22-year-old horse “Jericho,” her cats, Earl and Fred, and dogs, Diesel and Lulu.

In lieu of flowers please consider making a donation to Foothills of the Carolina Hospice House. A visitation will be held Friday, Jan. 11 at McFarland’s Funeral Home, in Tryon from 5-7 p.m. Memorial services will be held at Jacksons Grove Methodist Church in Landrum, where Pat was a long time member, on Saturday, January 12 at 2 p.m.