From Barney’s woods to Hollywood 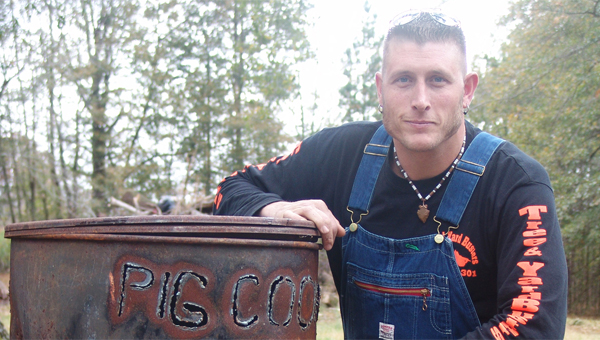 Josh Owens shown with his homemade pig smoker will appear on the Discovery show "Moonshiners" to air Nov. 7. (photo by Leah Justice)

Owens to star on Discovery’s “Moonshiners”

What started as a memorial to his longtime friend and local moonshining legend Barney Barnwell has landed Columbus native Josh Owens starring on reality television.
Owens, 35, will be one of the stars of the upcoming season of Moonshiners, which begins on the Discovery channel next Wednesday, Nov. 7 at 10 p.m.
Owens is seen in the preview for the show saying, “I tend to be the guy that’s always at the wrong place at the right time…. or the right place at the wrong time.”
He is described by the Discovery channel as an “all around madman” who spends time on his motorcycle with his dog Cutie Pie riding shotgun on the handlebars.
“Lumberjack, biker, moonshiner and all around madman, Josh splits his time between South and North Carolina. Long before he became a moonshiner, Josh had a career as a professional superbike and motocross racer. These days, Josh’s motorcycle time is spent on the road with his dog Cutie Pie riding shotgun on the handlebars,” says Owens’ biography on Discovery’s website at dsc.discovery.com/moonshiners.
Owens owns Tree and Yard Busters in Polk County and spends most of his time climbing and removing trees, working a bobcat and dump truck and clearing land.
He said he begged Barnwell to let him build an underground still for him for years. Barnwell landed a reality show on the History Channel and finally told Owens to build the underground room that would be used as a stage for Barnwell’s band, the Plum Hollow Band during the day and a still at night. Just as Owens got started, Barnwell had two strokes and died at age 58. Owens said after Barnwell landed the show he told Owens he was going from “Barney’s woods to Hollywood.”
Owens and his friend Billy Canny, also on the Moonshiners show, stayed at the hospital for two weeks prior to Barnwell passing and decided to carry out the project as a memorial to Barnwell.
“I had no idea any of this was going to happen,” Owens said. “I just built this up and did it for Barney. It’s just a miracle in itself. Heck, (the Discovery channel producers) were gone. The fact that I did something to do the right thing and it turned into all this is crazy.”
They finished the project in Barnwell’s memory and about a year later, Barnwell’s wife, Debbie got a phone call from Discovery asking if Owens and Canny did the project.
“They liked it so much they came out from New York and California and said they wish they could have seen me doing this,” Owens said.
The Discovery channel producers said they needed some wrap up of shows they did with Barnwell, so Owens said his wheels started spinning.
“I asked them, what if I build an addition with a tunnel and another utility room and an outhouse as an escape route,” Owens said. “They liked that so much they asked me if I wanted a TV show and I said ‘heck yeah.’”
Owens and Canny, of Spartanburg, have been filming the show since the spring. They will film their last episode next week as the show premiers.
Owens said he’s spent more on this project than he’s getting paid to be on the show, but he did it for Barnwell.