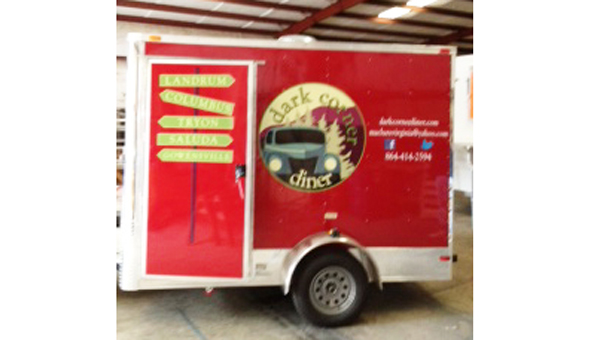 by Barbara Tilly
A new restaurant will soon open in Landrum – and in Columbus, Lynn, Saluda, Campobello.
Dark Corner Diner is a food truck – a mobile restaurant – that will bring its offerings to locations around the Thermal Belt beginning in late October or early November. It will be the area’s first true food truck, owner Virginia MacLure said.

Dark Corner Diner will offer gourmet sandwiches, soups, salads and desserts for lunch four days a week.
“The food will be interesting and diverse,” MacLure said. “No hamburgers, hot dogs or french fries.”
Some examples of the offerings are a chicken sandwich with Asian pear and Korean mayo, a roast beef sandwich on hoemade pretzel rolls with radish slaw, greens, black pepper mayo and grilled red onion, chicken and spinach soup, Tunisian stew, cornbread salad, white bean and feta salad, chocolate cream cheese brownies, Macadamia nut bars and gingerbread with hot caramel sauce.
MacLure, who used to run the restaurant in the Open Book store in Greenville, S.C., said the food truck industry is taking the country by storm. In 2011, according to the National Restaurant Association, food trucks were the single fastest-growing segment of the restaurant industry, grossing more than $630 million.
According to MacLure, food trucks have made entrepreneurship accessible for many would-be restauranteurs during the economic recession of the past several years. Another factor that spurred the industry’s growth was express shipper DHL’s decision in 2008 to shut down its U.S. operations, which put many suitable trucks on the market at an affordable cost.
The food truck industry is still fighting for legitimacy, MacLure said, both in the food business and in public perception.
“There are challenges in finding good locations that work for all the food providers in an area,” she said. “Towns and cities are still working out ways to offer food truck permits that are fair to everyone.”
For more information about Dark Corner Diner, including the locations, schedule and daily menu, visit www.darkcornerdiner.com.

It’s not often one gets to ride with ghosts and goblins, but at the Green Creek Hounds (GCH) Hunter Pace... read more