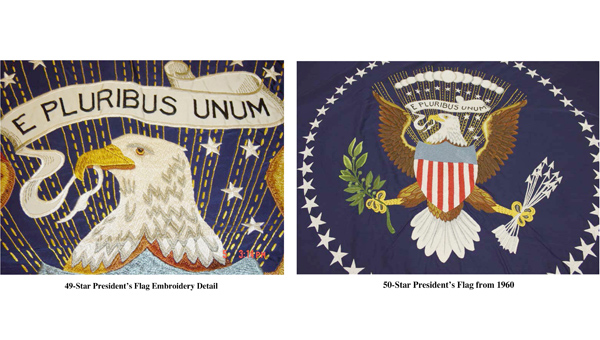 For the first time in history, all six flags from the White House during President Dwight D. Eisenhower’s administration will be together in a single exhibit. The exhibit will be on view at the House of Flags Museum in  Columbus from Oct. 10-13 from 9 a.m. to 9 p.m. on those days.
The flags will likely never be on exhibit again, according to Robert Williamson of the House of Flags.
“I’m the only person who has ever examined these three presidential flags,” said Williamson. “Once they go out of this display they will go back to vaults where they will probably never be seen again…. You’ve got to see them to believe them.”
Eisenhower, the nation’s 34th president, was the only president in history to serve under three different President’s flags. The exhibit includes the 48-star, 49-star and 50-star President’s flags and the corresponding U.S. colors.
The 50-star flag is the actual flag unveiled in the White House Cabinet Room when Hawaii became the 50th state.
The 49-star President’s Oval Office flag was handmade at the U.S. Army Philadelphia Quartermaster Depot in 1958 and will be on public display for the first time since leaving the White House in 1960.
The exhibit was made possible by a grant from the Polk County Community Foundation and support of residents of Tryon Estates. The Polk County Board of Commissioners approved on Oct. 1 a resolution in support of the display.
Admission to the House of Flags, located at 33 Gibson St., Columbus, is free during the exhibit.