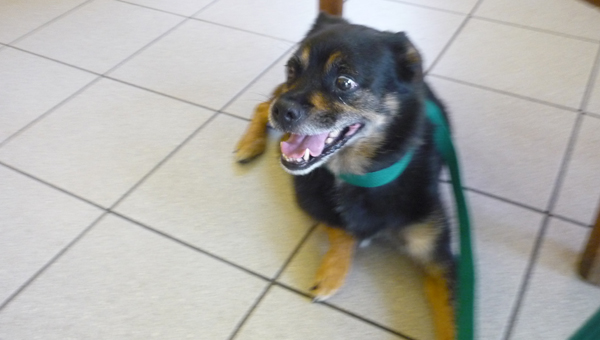 I have often spoken about the emotional roller coaster that I seem to ride on.  For the last few months it has exhilarated, not only with my kids (the animals) but good friends and supporters also.
At church I pray for Rosie and her daughter, I know her husband is failing.  I run into Marshall, who suffers Alzheimer’s, I touch his shoulder and he looks up and smiles though I know his recognition of me is dimming.  His dear wife smiles at me with thanks and encouragement.  I must send a letter to their daughter who also supports me from afar.  Richard tells me his wife has fallen and cracked her head and the wound has reopened but she’ll be okay.  I hug the man, send my condolences to Barbara and add them to my prayer list.
Two months ago I was scheduled to visit Janet and Tory and their two new Boxer pups.  Janet had a bad fall and went to the hospital.  I spoke with Tory on the phone as he kept me updated on Janet’s condition.  She’s back home now and has lost most of the feeling in her arm and it will be a year before it gets back to 80%.  I made the visit two weeks ago.  The Boxers were great and my good friends were as upbeat and supportive as ever.
On Wednesday I spoke at Kiwanis’s and Samantha Hurst was to be my sponsor but it seems she had another pressing engagement.  I and all the folks there were elated about the twins and the hall was abuzz with excitement for her.  Before my presentation we learned of the death of Bennie Goodwin, who was a dear friend to many of the people there.  I was to speak about my upcoming Bark in the Park event among other things.  Under the circumstances I wasn’t in the mood to make a pitch so I altered my presentation.  Condolences to Bennie, some fun talk about Samantha and the girls and then I told the tale of Mr. Budweiser, the homeless dog with the damaged leg.
I will be picking up Mr. Bud (Trippy) from FHS in a few hours to take him to Bonnie Brae to have his leg removed.  I often write in the middle of the night as it is now 4 a.m. Monday morning.
On Saturday I went to FHS to walk Rocco, I’ve had a few nibbles but the dear boy still needs a home.  After his walk I fetched Mr. Bud and all the folks there for the rabies clinic oozed and aahed at this sweet little boy.  I left and went to visit a dear lady who has offered to adopt Mr. Bud when he’s well enough.  She knew the homeless man and was actually on the phone with him when Mr. Bud was struck by a car as a pup 8 years ago.  I’m withholding names because much of the story both before and after isn’t pretty and I wish to preserve whatever dignity I can.  All the paper work has been completed and Mr. Bud will live out his life in a very loving home after he recoups from surgery.
Earlier in the week I went to visit Landrum vet about a one year old female pit whose jaw was broken due to a fight.  I held the sweet girl in my arms as the family looked on.  The only hope was Upstate, which would cost thousands of dollars (which I didn’t have), or euthanasia.  I also feared that the dog would be put back into the same situation so I had to refuse but I left the room in tears.  Dr. Raines followed me out and said, “It’s okay Lennie, you can’t help everyone.”  “I know Donna,” I replied, “but I don’t feel I’m refusing the people, I’m refusing the dog.”  I was angry about the hundreds of people I’ve helped who promised to give a little back when they could so I could help others, but never followed through.

Sweet Rocco, I haven’t forgotten you

Rocco (photo submitted) Last week’s tale of Jane reminded me that it was time to pay a little more attention... read more