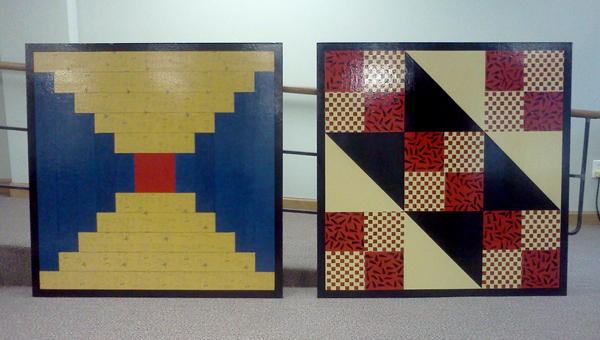 The first two wooden quilt blocks to be installed on the Landrum Quilt Trail have been completed. The block on the left, based on a quilt block called “Courthouse Steps,” will be installed at Landrum City Hall, while the one of the right, called “Jacob’s Ladder,” will be installed at the Landrum Fire Department. A quilt trail is a series of wooden painted quilt blocks displayed outdoors along a designated route in various locations, such as storefronts, barns and gardens. The Landrum Quilt Trail received a $5,000 grant through the Mary F. Kessler Fund of the Polk County Community Foundation. The Kessler Fund grant will provide quilt blocks for O.P. Earle Elementary School, the Landrum Library, the Hospice Thrift Barn and the Thermal Belt Habitat for Humanity ReStore. (photo by Leah Justice)