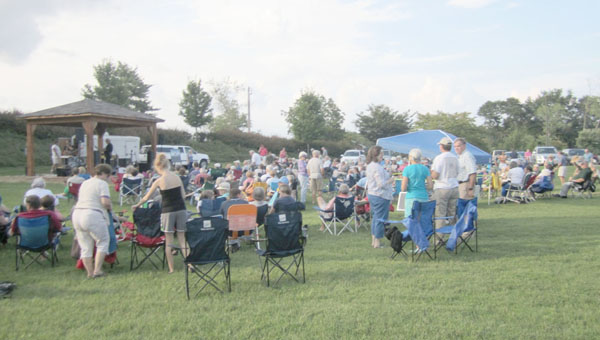 The audience gathers at the Landrum Library’s new outdoor stage on Saturday, Aug. 11 before the David Holt concert. The concert was part of the series of events associated with the New Harmonies traveling Smithsonian exhibit celebrating American roots music. (photo by Barbara Tilly)

Brushfire Stankgrass Trio to perform Aug. 16
David Holt and his son, Zeb, performed to a large audience on Saturday, Aug. 11 at the first outdoor concert in the New Harmonies series at the Landrum Library.
Holt, a Grammy-winning musician who specializes in old-time American music, is the host of public television’s “Folkways” and PRI’s “Riverwalk: Classic Jazz from the Landing.” He performed on many instruments during the concert, including the mouth bow (also known as tune bow), harmonica, washboard, several different guitars, banjo, bones and the human body (as a percussion instrument played by slapping hands, arms and legs in different ways).
Holt talked about his friendship with another famed musician, Doc Watson, and played many songs in honor of Doc Watson.
For example, he played “The Cuckoo,” which he said was the reason Doc Watson was discovered. In the early 1960s, musician Clarence Thomas Ashley, folklorist Ralph Rinzler and folk song collector Eugene Earle were planning to record an album in the southern mountains and wanted to include a version of the traditional tune “The Cuckoo.”  Hearing that Doc Watson was the best in the area, they invited him to play guitar on the album.
The recording marked the acoustic guitar debut for Watson, who became known for his flat-picking style of playing.