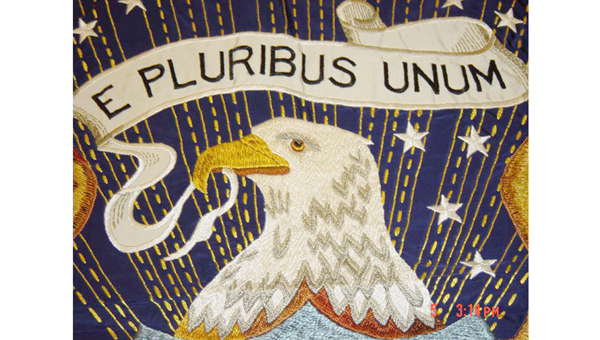 For the first time in history all six original flags from the White House during President Eisenhower’s administration will be together in a single exhibit from Oct. 10-13 at the House of Flags Museum in Columbus.
Dwight D. Eisenhower, the 34th president of the United States (1953-1961), was the only president in the nation’s history to serve under three different presidents’ flags. The exhibit includes 48-star, 49-star, and 50-star president’s flags and the corresponding U.S. colors. The 50-star U.S. flag on display is the actual flag unveiled in the White House Cabinet Room when Hawaii became the 50th state.
The flags are on loan from a private collection and from the Eisenhower Museum and Library in Abilene, Kan. Historic 1940s and 1950s photographs of the hand embroidery flag making process from the U.S. Army Quartermaster Museum at Fort Lee, Va. will also be on display along with other press photos of Alaska and Hawaii statehood events.
One of a kind – The 49-star President’s Oval Office flag, hand-made at the U.S. Army Philadelphia Quartermaster Depot in 1958, will be on public display for the first time since leaving the White House in 1960. This priceless hand embroidered silk president’s flag featuring 49 stars may be the only one of its kind ever made. The 49-star flag was official for only one year – July 4, 1959 to July 4, 1960.
Rare two-sided needle-painting hand-embroidery techniques are used to create these blue silk flags featuring a life-like eagle grasping olive branches and arrows with rays and clouds above; a red, white and blue shield; plus a scrolled motto E Pluribus Unum surrounded by a circle of stars corresponding to the number of states. The perfectly mirrored designs are identical on both sides of the flag – the backside being seen only after the flag is complete. All three president’s flags are unique hand-embroidered works of art with hand-tied gold and silver precious metal fringe.