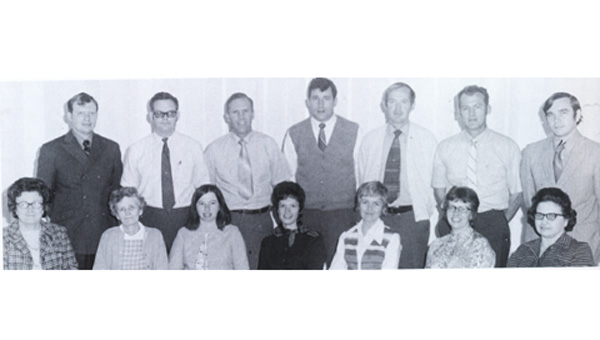 Whether it’s “Elmo” (the Tryon Tiger), freshmen being thrown over the bushes, eating Gertrude Taylor’s cooking or riding on the bus with Ethel Mae Morrison, many area residents have strong memories of their time at Tryon High School.
“A Day to Remember,” a reunion for anyone who attended Tryon High, is planned for Sunday, July 22 at 3 p.m. at Harmon Field. Music will be provided by deejay Bob Followay (50s, 60s, 70s, 80s, 90s and current music), and guests will share a potluck dinner. All who ever attended Tryon schools are invited to attend the reunion and bring a potluck dish.
It’s been 20 years since Tryon High School existed. The last class graduated in 1992 with 32 graduates. From 1989 until 1992, students at Tryon and Polk Central high schools attended separate schools but played sports together as the Polk County Wolverines while waiting for the new Polk County High School to be constructed. The first class of Polk County High School graduated in 1993.
The days of Tryon public schools began in 1885 in a small building located near where Stott’s Ford is today. Tryon School was moved in 1906 to a new building, which is now Tryon Town Hall.
In 1923, the old building was sold and a new school with pillars on the front was built on top of the hill where the current Tryon Elementary School is today. The town purchased 16 acres for $3,000 and constructed the school for the 280 elementary (grammar) school students and 45 high school students. At that time, students attended grades one through 11.
The Tryon school building went through several additions. The first was in 1928, when the old auditorium was converted into five classrooms and a library and a new auditorium was built on the opposite wing. A cafeteria was opened in what was later known as the old band room. Prior to the cafeteria, students were served soup and cocoa by the PTA, which was organized in 1921.
In 1935 a new gymnasium was completed (it was later known as the old gym and has since been demolished for a parking lot). A large room in the gym was used a shop class. In 1938, a commercial department was added, financed by the PTA and interested residents. It was also at this time that the Rotary and Kiwanis Clubs financed the formation of the Tryon School Board.
The 12th grade was added in 1947 and Stearns High School in Columbus closed, which brought more students to Tryon.

Pam Stone (right) with Kelley Steinman of PJ’s Fashions on Main in Landrum. Stone will read from her latest book,... read more