Here in the southern foothills of western North Carolina we have three species of “blue” birds to contend with. These are the indigo bunting, blue grosbeak and eastern bluebird. All three species are obvious and easy to see. They perch on prominent lookouts such as telephone wires or exposed limbs, and from this vantage point they sing to advertise their territory. 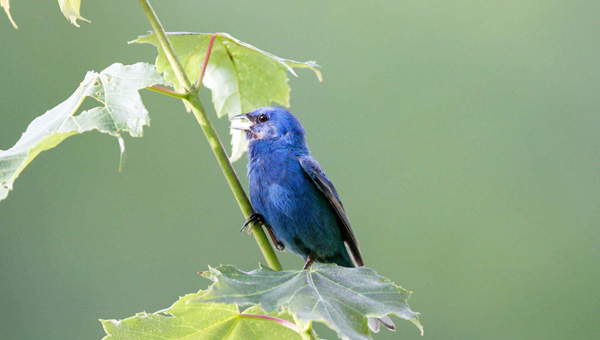 The indigo bunting and the blue grosbeak are closely related, and both eat a diet of seeds and insects. A quick look at their bills, which are both thick and perfectly adapted for cracking seeds, demonstrates their food preferences and adaptation.
The indigo bunting is the smaller of the two species, being just over 5 inches in length compared to the 7 inches of the blue grosbeak.
The males of both of these species are, as always, the more colorful of the sexes and the male indigo bunting is a rich iridescent royal blue all over, while the male blue grosbeak has darker purple-blue feathering. The female indigo bunting is not so brightly colored, and her colors can best be described as subdued. No distinctive field-marks interrupt her pale brown plumage.
During the autumn months, just prior to the fall migration, male indigo buntings undergo a feather molt and then superficially resemble the female, having exchanged the bright blue feathers of spring for quieter fall tones. They then migrate south and spend the winter months in Central America, where they are a common sight in cut over and scrubby areas.
Although they are a fairly common breeding bird in North Carolina, indigo buntings are not too common at feeders, and a bright blue male mingling with black and yellow goldfinches is a stunning sight. Usually it is during spring migration and unstable weather conditions when indigos visit feeders, and at this time of the year it is not uncommon to see at least half a dozen at one time as they pause for food and rest on their way north.
Another very easy way to find them is to listen for the male’s very distinctive song of descending paired notes that is sometimes described as “Fire, fire, where, where, put it out, put it out.” Once you have learned the song, you will soon discover how common the indigo bunting actually is. Then take a trip to FENCE, the Blue Ridge Parkway or any other open area with brushy vegetation and you will find them singing on the top of tall trees and shrubs. Once the identification code has been cracked, you will soon start seeing them everywhere.
Simon Thompson has lived in WNC for the past 18 years. He owns and operates his own birding tour company, Ventures Birding Tours. WWW.birdventures.com
He and Chris also own and operate the Asheville Wild Birds Unlimited Store. For more information on any of the birding activities in the area, drop by the store or check his website at www.asheville.wbu.com

Heard and not seen: Yellow-billed Cuckoos or “Raincrows”