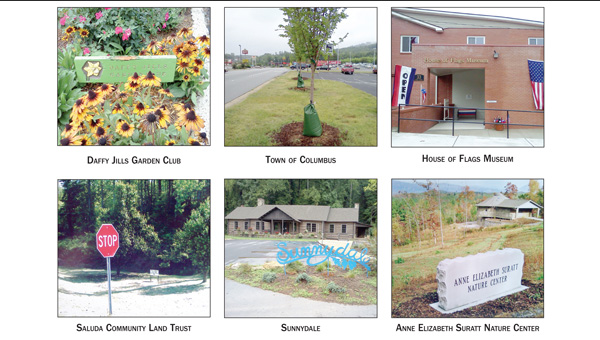 The Polk County Appearance Commission announced its 2012 beautification awards during the Polk County Board of Commissioner meeting Monday, July 9.
Polk County Appearance Commission Chair Joe Cooper presented the awards to six organizations and individuals who made contributions to the county’s appearance this year.
Winning projects included landscaping, tree planting, kudzu removal, the renovation of two buildings and the construction of a nature center.
The following organizations and individuals received the awards:
Daffy Jills Garden Club
The Daffy Jills Garden Club received an award for landscape gardening at several public sites, including the Tryon Post Office, the gardens at the Foothills Equestrian Nature Center (FENCE), the flower gardens in front of the Polk County Tourism Office and the landscaping around the base of the Doughboy Statue on East Mills Street by the courthouse in Columbus. Carolyn Cobb received the award for the Daffy Jills Garden Club.
The Town of Columbus
The Town of Columbus received an award for planting the many gateway trees lining the sides of Hwy. 108 (West Mills Street) coming into Columbus, the county seat. The project required the support of the Polk County Community Foundation and the N.C. Department of Transportation (DOT), with management coordination by Jonathan Kanipe, Columbus Town Manager. Columbus Councilwoman Ernie Kan received the award for the town.
The House of Flags
The House of Flags Museum received an award for turning the old fire station building on Gibson Street in Columbus into a flag museum that is an educational experience and an attraction for Columbus and Polk County. House of Flags Board of Directors Vice-Chairman Bob Lair received the award for the museum.
Saluda Community Land Trust
The Saluda Community Land Trust received an award for removing kudzu in numerous areas of Saluda and greatly improving the appearance of the corner of Ozone Drive and Thompson St., a highly visible site on the most important entry road into Saluda. The kudzu removal project took two years of weekly work with volunteers. The organization also coordinated with the North Carolina Department of Transportation, which owns the property, showing how cooperation between a state agency and a local land trust can greatly benefit a town. Nora Parks Anderson received the award for the land trust during the City of Saluda’s June council meeting.
Bob Lane – Sunnydale
Bob Lane received an award for the complete renovation of the historic log cabin known as Sunnydale, located on South Trade Street in Tryon. Lane, who owned the building, renovated it and then donated it to Tryon Little Theater with an agreement that the building be made available for community events.
Walnut Creek Preserve – Anne Elizabeth Suratt Nature Center
Walnut Creek Preserve received an award for building the Anne Elizabeth Suratt Nature Center at the preserve, a learning center for southern Appalachian forest studies in the Sunny View area of Polk County. Babs and Bob Strickland of Walnut Creek Preserve received the award.
This is the second year the appearance commission has given awards. The awards are given for projects that the public can view. To receive a certificate the beautification work must be something the general public can see from public roads or sidewalks or be on a property that is open to the public. The property can be either privately or publicly owned, Cooper said.
“Making our county more beautiful for the public to see has the immediate benefit of allowing those of us who live here to enjoy our home county all the more,” Cooper said. “There are at least three other important reasons why public beautification work is important and these reasons relate to economic and tourism development.”
Cooper said when an area’s buildings and roadsides are beautiful, clean and green, it attracts tourists and guests who will stay a while, eat in area restaurants, shop in area stores and stay in  local B&Bs or inns. Cooper said the county also has a better chance to bring in new businesses, grow existing businesses and provide more local jobs.
“We are more appealing to someone who may decide to build their dream home here in one of our several developments,” said Cooper. “This provides local construction jobs and other obvious benefits to our economy.”
Cooper also thanked appearance commission members Carolyn Ashburn and Cathy Brettman, who helped with this year’s awards by publicizing the awards and collecting applications.