North Sea Gas at TFAC on May 20 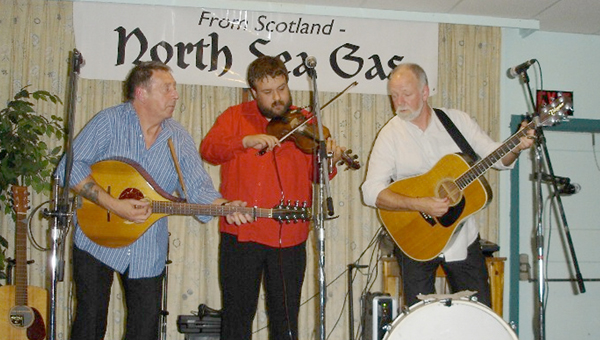 The Scottish band North Sea Gas, known worldwide for its great instrumental music and three-part harmonies, will perform at the Tryon Fine Arts Center on Sunday, May 20 at 2 p.m. The program, which will be followed by a reception at the Lanier Library, is free and everyone is welcome.
One of Scotland’s most popular folk bands, the North Sea Gas trio, Ronnie MacDonald, Grant Simpson and Dave Gilfillan, play guitars, fiddles, bousouki whistles, bodhrans and banjos, adding vocals and good humor to their performances. The group has recorded 15 albums and has received gold and silver awards from the Scottish music industry. It has performed frequently at the world-renowned Edinburgh Festival and makes regular tours throughout Europe, Australia and North America, but their largest audience, an estimated 800 million, was on Chinese television.
Lead singer Dave Gilfillan, who plays guitar, banjo and mandola, has a reputation for rousing sing-along vocals and heartfelt ballads as well as his tongue-in-cheek humor.
Guitarist Ronnie MacDonald began with the band 23 years ago but took a break of 15 years with his own band in Australia before returning to North Sea Gas six years ago.
Fiddler Grant Simpson grew up with music in Lossiemouth, Scotland and has always been a full-time musician. He also enjoys rugby football and is a keen student of Scottish history.
The performance is sponsored by the Lanier Library and made possible by a grant from the Polk County Community Foundation and the Kirby Fund.
– article submitted
by Lanier Library