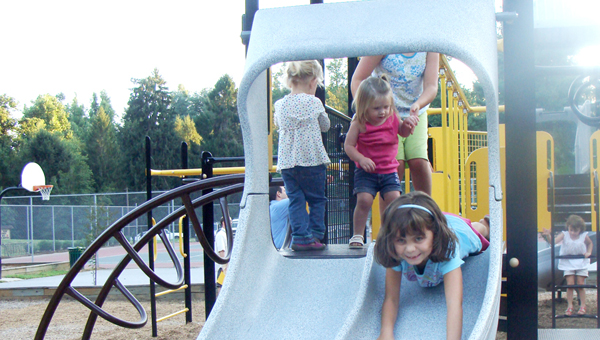 Kids of all ages play on the new playground at Saluda Elementary School during its dedication service Aug. 23, 2011. Principal Ronette Dill said she enjoys having an agreement with the city for citizens to use the playground and other facilities after school hours because it brings the community together. (photo submitted by Lynn Montgomery)

The City of Saluda gained a new recognition May 1 when the national non-profit KaBOOM! named Saluda a 2012 Playful City.
KaBOOM! created the Playful City USA distinction in 2007 to address the need for more play in kids’ lives.
“The City of Saluda worked very hard on this application, and we are proud to be honored for the first time this year,” said Saluda administrative assistant Monica Pace. “With the support of the City of Saluda Board of Commissioners, the Saluda Business Association and Saluda School, we were able to achieve this goal. We are looking forward to promoting this honor throughout the year in our community.”
Being named one of the 213 Playful City USA communities makes Saluda eligible for $15,000, $20,000 and $30,000 grants via Let’s Play, a community partnership led by Dr Pepper Snapple Group.
Grant recipients will be announced on June 4.
Saluda City Commissioner Leon Morgan said the application process gave the city a chance to focus on how to provide better recreational choices for its residents.
“By mapping our city, we found that Saluda is located in a play desert, with little play opportunities for the children who live, learn and play in the area,” Morgan said. “By seeing this urgent need for play, we realize that we must focus on building a master plan for our parks system, and follow it through to completion.”
The process also showed Saluda the strong start they’ve already made through cooperative partnerships with the school and organizations like the Saluda Community Land Trust (SCLT), Morgan said.
Saluda also currently has joint-use agreements with Saluda Elementary School to allow access to the school’s outdoor facilities during off-hours.
Saluda Elementary School Principal Ronette Dill said once school lets out citizens can take advantage of the walking trails, tennis courts, basketball courts, softball fields and playground.
“It really works out well because it is amazing the number of people that come out to play tennis, the people who bring their grandkids out to the playground and those who come out and walk the walking trail,” Dill said. “It’s really helped bring the community closer together. When we were doing the fundraising for the new playground everyone downtown got on board to help us raise the funds.”
Meanwhile, SCLT is leading the charge to convert the city’s old 18-acre dumpsite into a nature park with greenways connecting the park to public access points within the city limits.
“Some of the most innovative concepts and cost-effective programs are being developed in Playful City USA communities,” said Darell Hammond, founder and CEO of KaBOOM! “Cities like Saluda are key allies in the fight to combat the play deficit and serve as outstanding role models for government and community leaders across the country.”
In the sixth year of the annual program, 19 Playful City USA communities received recognition for the sixth consecutive year, while 69 cities like Saluda claimed their first Playful City USA designation.
Spartanburg and Greenville were also included in the 213 cities recognized nationwide.