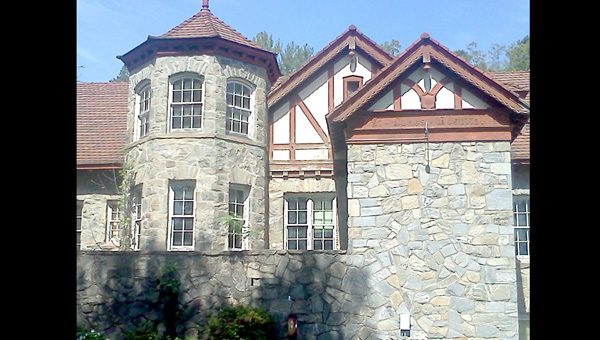 The Jervey Palmer building on Carolina Drive in Tryon, which formerly housed the Polk County Department of Social Services and other county offices, is now empty. (photo by Leah Justice)

What used to be a bustling building for county offices, and before that the home of the first St. Luke’s Hospital, is now empty. County commissioners say they would like to see the building put to good use by someone.
Polk County owns the Jervey-Palmer building, located in Gillette Woods in Tryon, which until recently housed the department of social services (DSS), the Meeting Place Senior Center, mental health services and veteran’s services.
The county recently completed moving all offices out of the dilapidated building. It purchased the former Carolina Classical School off Skyuka Road in the Columbus area to house the senior center and veteran’s services, purchased a home near Outreach Ministry in Columbus to house mental health services and built a new DSS building in Mill Spring.
The Jervey-Palmer building was built in the 1920s, and St. Luke’s Hospital opened there in 1929.
The county took over the building in 1972, when St. Luke’s built its new hospital in Columbus.
Several ideas have been mentioned in the past of possible uses the building could serve, including being developed into apartments given its location in Gillette Woods, a residential area.
Polk County Manager Ryan Whitson said he believes because the building is in Tryon’s zoning district, the town would be the best to decide what the Jervey-Palmer’s next use should be.
“I’d like to see it go to Tryon since it’s in their city limits,” Whitson said. “I think that’s the best option for that building.”
Whitson said he would recommend to commissioners that the county sign over the building to Tryon at no charge.
Commissioners said they want the building to be used in some way.
Commissioner Tom Pack said the county should sell the building and use the money to replace economic development funding that was previously spent.
“When I left office after my first term as commissioner we had placed over $250,000 in a fund for economic development,” Pack said. “That money was spent by the next board of commissioners and had no return in job creations as we had intended the money to be used for. We need to get serious about economic development and provide the funding to help bring jobs to Polk County. We were very successful in doing this during my first term as commissioner and we need to get back on track.”
Commissioner Vice-Chair Renée McDermott said she would prefer the building be sold.
“If it could be sold for preservation and re-used for a business or for housing, that would be my preference, as it would add to both Tryon’s and the county’s tax base,” said McDermott. “But if not, I would like to see it preserved by an historical preservation association.”
Commissioner Ted Owens said when he was on the board around 2007 it was decided it was time to move out of the Jervey-Palmer building and to purchase the former Carolina Classical School. He said he and the rest of the board then felt they could sell the Jervey-Palmer building to a developer to convert it to apartments and the county could take the proceeds from the sale to help pay off the building now used as the senior center.
“I personally believe that this building is one of the best rock-structured buildings in Polk County,” said Owens. “With the right innovative developer it could be turned into a useful showplace like some other older buildings in our county have been. As one commissioner I would be in favor of putting it on the market and see what happens. It certainly does not need to just sit there and deteriorate.”
Commissioner Chair Ray Gasperson said he’d like to get ideas from the public regarding what should happen to the building.
“I’m open to any practical solution,” said Gasperson. “I would like to hear any constructive ideas that the public may have for the future use of this building.”
According to the Polk County Tax Office, the building is situated on 4.92 acres and has 17,777 square feet.
The assessed tax value of the building is $2,374,805, but many have questioned the value because of its current need for rehabilitation. 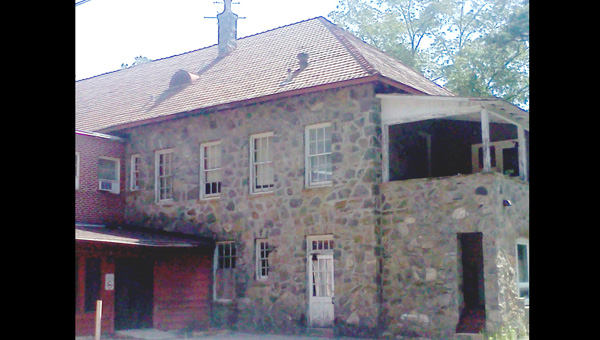 Commissioners are considering what to do with the Jervey Palmer Building, which is now vacant. (photo by Leah Justice)

Polk baseball knocks down three in a row