The police department of Pacolet, S.C. and the Spartanburg County Sheriff’s Office are searching for Steven Ben Searcy, who they say defrauded the roofing company he worked for out of thousands of dollars. 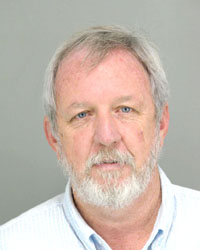 Warrants have been issued for Searcy’s arrest, but as of noon yesterday, April 30, officers had not yet located Searcy.
Searcy, 56, of Columbus, is wanted on several charges of obtaining goods by false pretenses and breach of trust, according to South Carolina authorities.
Searcy was working for Reeves Construction in Spartanburg County, and six of the cases allegedly occurred in Pacolet, S.C.
In three of the Pacolet cases, Searcy is alleged to have taken payments from homeowners for roofing work but never gave the money to Reeves Construction.
In the other three cases, Searcy allegedly represented himself as a contractor and took money for roofing work that was never done, according to police reports.
According to the Pacolet police, Searcy paid back more than $6,000 to three homeowners, but two warrants will still be served to Searcy out of Pacolet.
Reeves Construction owner Ken Reeves told News Channel 7 he is out more than $50,000 because of Searcy. He said he fired Searcy in February after discovering the scam.
Reeves said his company had delinquent accounts, including ones in Pacolet, and he couldn’t get the homeowners to pay them for the work already completed on their roofs. After sending letters threatening legal action if they were not paid, homeowners called Reeves Construction and said they gave the money to Searcy, Reeves said.
Reeves estimates 19 or 20 homeowners were scammed by Searcy, with victims allegedly in Pacolet, Cowpens and Boiling Springs, S.C.
Anyone who knows the whereabouts of Searcy is urged to contact South Carolina authorities through the South Carolina CrimeStoppers number at 1-888-CRIME-SC (1-888-274-6372).