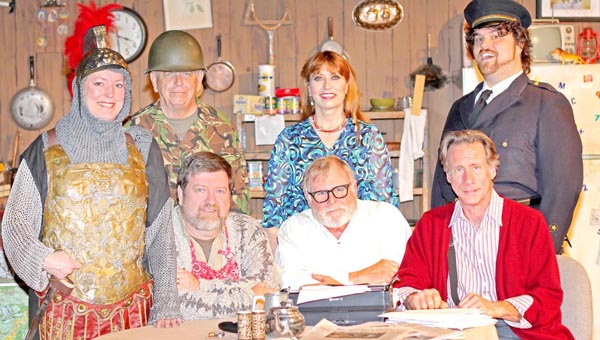 “Knock Knock,” Tryon Little Theater’s last show of the season, has been described as a “knockabout farce” and a “miracle play in the absurdist tradition,” or, as director Frances McCain describes it, “Alice in Wonderland meets The Wizard of Oz.”
Written by Jules Feiffer, Pulitzer-Prize-winning cartoonist, playwright, screenwriter and children’s book author and illustrator, the play takes place in a cabin in the woods with two middle-aged bickering recluses (Abe and Cohn). There’s a knock at the door, and in walks Joan of Arc. But that’s not the only odd thing about this play – in fact, the whole thing is absurd. In a good way, of course.
Elvin Clark plays Cohn, an unemployed musician. He’s joined by real-life neighbor – and now familiar TLT leading man – Lavin Cuddihee, who plays Abe, the successful retired stockbroker. Together they make the “odd couple” of the play, who haven’t left their cabin in more than 20 years.
Nancy Winker of Rutherfordton portrays Joan of Arc. Audiences may remember her from her roles in “Oliver” and “The Complete Works of William Shakespeare (Abridged)”. Chris Bartol, no newcomer to the Tryon stage, plays Helmut Wiseman and a couple of other odd characters who drop in to disrupt Abe and Cohn’s life.
Supporting these veteran actors are Joshua Moffitt, Lorin Browning and Becky Oliver. The less said the better about their roles  – there need to be some surprises, after all!
Directed by Frances McCain, this “kooky” play features a set designed by Greg Wright and constructed by Bob Richardson and his crew of set builders. Rebecca Davis, Jody McPherson, Mimi Alexander and Matthew Alexander took care of set decoration (no small task for this production). Mimi Alexander and Mathew Myhre handle sound and lighting.
“Knock Knock” runs for two weekends at the Tryon Little Theater’s Workshop at 516 South Trade Street in Tryon. Performances are April 19-21 and 26-28 at 8 p.m., and April 22 and 29 at 3 p.m. The box office is open at the workshop from 10 a.m. – 1 p.m. Monday through Saturday. Call 828-859-2466 to reserve tickets or visit www.tltinfo.org for more information.
– article submitted
by Monica Jones