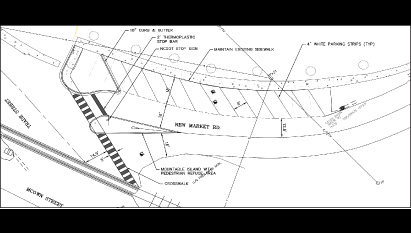 Left: Architect’s drawing of changes proposed at the intersection of New Market Road and Trade Street in Tryon for the third phase of Streetscape.

Construction is scheduled to begin next Monday, April 23, on the third phase of Streetscape improvements in Tryon, which involves improvements at the intersection of New Market Road and S. Trade Street.
The improvements include changing the intersection to more of a 90-degree angle and adding a crosswalk for pedestrians and an area for plantings, as well as a bump out.
Drainage improvements, sidewalks and other landscaping are also planned.
More parking will be added along McCown Street, which will become a one-way street. The originally planned curb and sidewalk on McCown was cut from the plan because of Norfolk Southern requirements, according to Steve Cobb of the Tryon Downtown Development Association (TDDA).
This project received grant funding from the Mary F. Kessler Fund of the Polk County Community Foundation. That grant funding, added to municipal funds budgeted by the Town of Tryon for Streetscape Phase III over the last two years, have made this project possible, Tryon officials said.
The TDDA developed the Streetscape master plans for the intersection, as well as for other parts of the downtown area. Other improvements that have been completed over the past decade have included new sidewalks, street and traffic lights.
For more information on the town’s Streetscape master plan and information about downtown Tryon, visit www.downtowntryon.org.

‘Distraction’ filming to start in Landrum